BEHOLD! Mankind’s First Photo Of A Black Hole Ever 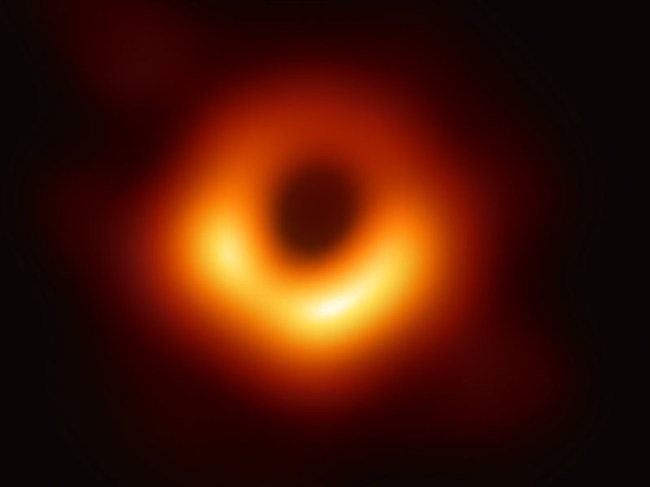 Ladies and gentlemen, you are witnessing history right here, this is mankind’s first glimpse at a black hole. Scientists revealed a photo of a supermassive black hole, this is the first time the celestial phenomena has been captured on an image.

The Event Horizon Telescope (EHT), which is composed of eight radio telescopes stationed on five continents, was able to take a photo of a black hole, a celestial body that has such strong gravitational pull that not even light can escape. To get this one fuzzy image it took supercomputers, eight telescopes around the Earth, hundreds of researchers, and over one year. Humanity has been able to see the unseeable.

The global project connecting radio telescopes around the planet including ones in Chile, Hawaii, Arizona, Mexico, Spain, and the South Pole. Then the data was combined to form the image of the black hole that is 55 million light years from Earth. The black hole is in the center of the huge galaxy Messier 87 (M87). The supermassive black hole has a mass 6.5 billion times that of our sun.

We are proud to be part of this revolutionary discovery.
The #RealBlackHole image is the result of the large scale collaboration Event Horizon Telescope, where EU-funded researchers have played a key role. #EUResearch #EHTBlackHole
Read more here → https://t.co/p57pVlU0nr pic.twitter.com/yQstgrItlo

“You have probably seen many, many images of black holes before,” said Heino Falcke, a German professor of radio astronomy and astroparticle physics. “But they were all simulations or animations. And this [image] is precious to all of us, because this one is finally real.”

This is M87* and this the first image of a black hole! Mass is 6.5 Billion suns within size of a solar system. Precious because real. Waited 25 years for this. Dark shadow is where light disappears in #eventhorizon. We see something never seen before. #blackhole #JustWow #EHT pic.twitter.com/3nCosTzyER

“It has a mass 6.5 billion times that of the Sun. And it is one of the heaviest black holes that we think exists. It is an absolute monster, the heavyweight champion of black holes in the Universe,” Falcke said at the European Research Council’s news conference in Brussels. “What we see is larger than the size of our entire Solar System.” Xbox 360 owners are getting nervous looking at this photo.

We can see this ring of fire because the superheated gas is being sucked into the black hole and leaves a red halo while it is being devoured. The light is brighter than all the billions of other stars in the galaxy combined, which is why we can see it despite being to mind-blowingly far away. The circle in the middle is black because light can’t escape. The consortium said the dark hole was “outlined by emission from hot gas swirling around it under the influence of strong gravity near its event horizon.”

WOW. The first time we’re getting a look at a black hole, right here: pic.twitter.com/dD7iD92D82

We should all be happy that it is so far away because if we were close to the black hole’s event horizon, our planet, sun, electromagnetic radiation, everything would be consumed by the black hole.

The story of @ehtelescope’s quest to capture the first image of a black hole was covered by @SmithsonianChan’s documentary “Black Hole Hunters” premiering this Friday. #RealBlackHole #EHTBlackHole pic.twitter.com/49Ycr4c2nz

“Black holes are the most mysterious objects in the Universe,” Sheperd Doeleman, the project director of the Event Horizon Telescope, said at a press conference today before unveiling the image. This is a landmark day for astrophysicists and especially Albert Einstein who developed his theory of general relativity in 1915, which proposed the existence of black holes.