The Ultra-Creepy First Trailer For ‘IT: Chapter Two’ Has Been Released And Just Go Ahead And Take My Money Now 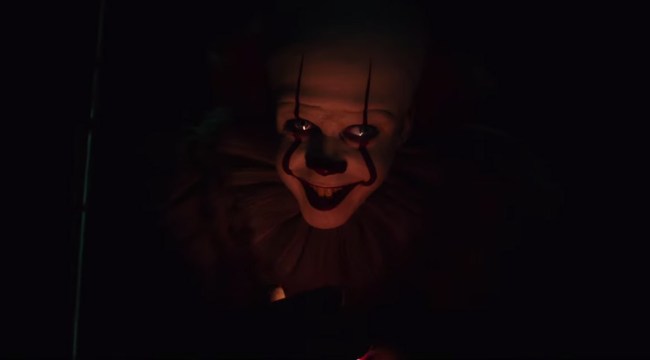 The first trailer for the long-awaited IT: Chapter Two has been released and if you liked the first chapter of IT, then, whoa boy, are you in for a treat.

“Because every 27 years evil revisits the town of Derry, Maine, IT: Chapter Two brings the characters — who’ve long since gone their separate ways — back together as adults, nearly three decades after the events of the first film.”

Aww yeah. The gang is getting back together, and that includes Pennywise the Dancing Clown, of course.

The man behind the evil mask, Bill Skarsgård, recently spoke to Entertainment Weekly about how Pennywise has changed in the 27 years since the story of the previous film.

“He’s inflicted fear on his prey, and he’s very focused on fear, but he’s never experienced it himself,” Skarsgård says. “Now he’s experienced something that he has been inflicting on others and … there’s a shift leading into the second movie.”

It was once a game to Pennywise, but the being is no longer simply delighting in the suffering he causes. He wants revenge. “It fuels hatred and anger towards the kids, who will be adults in this one, so I think there might be an even more vicious Pennywise,” Skarsgård teases. “He’s really going after it.”

Skarsgård also stated that, somehow, the Pennywise we will see in the sequel will be even more creepy.

“You can change him or make him whackier, but he’s not really bound to continuity in the sense that a normal character would be. We can explore his unpredictability now that we’ve established the character for the audience. We can still sort of shock them,” he said.

Now that he’s done with playing the character, Skarsgård once again talked about how playing Pennywise really messed with his mind.

“After we wrapped, I was in my childhood home in Sweden, sitting having coffee with my mom at our kitchen table, and realized, ‘Oh, holy sh—, I don’t have to deal with this relationship anymore!’ It was a very quick shift of just feeling better, like, ‘Oh my God, I’m relieved that I don’t have to deal with the darkness of the character.’ I likened it to an exorcism – him exiting my body and getting rid of the Pennywise toxins.”

But after letting the clown into his head, Skarsgård found it hard to push him out.

“I was home, done with the movie, and I started having very strange and vivid Pennywise dreams. Every night, he came and visited.”

He’s good now though, saying it was all just part of the “process of letting go of the monster.”

IT: Chapter Two opens in theaters on September 6th.