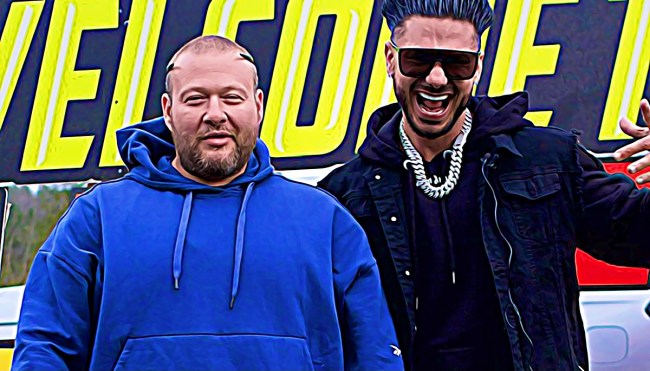 Humans have spent millennia envisioning the grim fate that awaits the unfortunate souls who are deemed guilty of the assortment of moral transgressions cultures around the world believe warrant a particular undesirable punishment: an eternity of unspeakable damnation in the realm you probably know as “Hell.”

Exactly what awaits those banished to a domain frequently depicted as an endless expanse of fire and brimstone varies depending on which depictions you choose to believe. For example, the ancient Greeks dreamed up a number of tales concerning a slew of torturous fates that befell those unlucky enough to end up in Tartarus, while Dante Alighieri famously outlined the nine circles home to the increasingly miserable existence that awaited anyone guilty of the sins associated with each.

There are plenty of movies and television shows that have also treated us to some more modern interpretations: the 1997 cult classic Event Horizon featured scenes that will likely never see the light of day after the studio determined they were too graphic, while the Twilight Zone flipped the script with the twists that capped off the episode “A Nice Place to Visit.”

There are also plenty of people who will tell you Hell doesn’t actually exist. However, I can confidently say those people are wrong; not only does Hell exist, but it can actually be a pretty good time.

I should probably clarify I’m talking about Hell, Michigan, a tiny unincorporated township located about an hour west of Detroit. The hamlet—which recently made headlines after appointing a cat as its mayor for a day—isn’t exactly a hot vacation spot; its only real attractions are a restaurant, a gift shop (and adjacent miniature golf course), and the bar located on its main (and only) road.

However, that all changed last month courtesy of Mountain Dew, which decided there was no better place than Hell to host an event that was officially dubbed “To Hell with MTN DEW FLAMIN’ HOT” inspired by the spicy twist on the classic soda that the brand unleashed on an unsuspecting world last year.

Mountain Dew was kind enough to invite me to experience the takeover in person on a night where I also got the chance to chat with its two guests of honor: Action Bronson, who harnessed his culinary knowledge by whipping up a few dishes inspired by the unconventional soda flavor, and Pauly D, the Jersey Shore alumnus whose DJ set served as the primary attraction.

The entire thing might sound absurd—and as someone who got to witness it firsthand, I can assure you it was.

A Recap of My Night In Hell 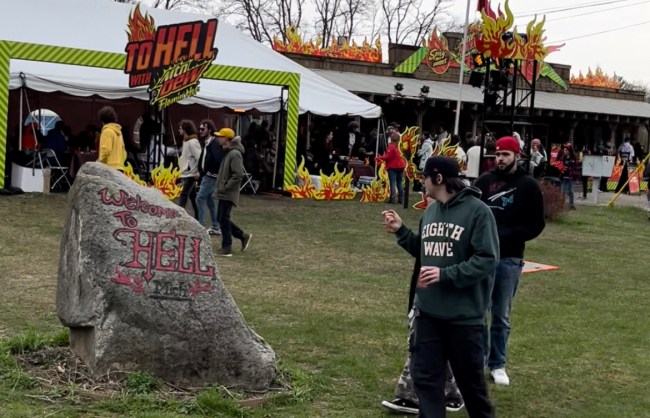 Unlike its metaphorical counterpart, it’s fairly hard to accidentally end up in Hell. The University of Michigan is easily the most notable destination in the somewhat immediate vicinity, but it would still take you around 30 minutes to drive there from Ann Arbor.

As a result, I was fairly surprised to see the road leading to Hell—which, as a sign in the gift shop notes, is paved with the asphalt littered with potholes as opposed to good intentions—was home to multiple electronic traffic signs warning prospective visitors the event had reached max capacity (it had apparently generated so much buzz that local law enforcement opted to limit capacity to around 2,000 people).

Based on the attendees I chatted with after entering the massive throng of people who’d descended upon Hell for the night, the crowd was a mix of relative locals and those who’d put in a fair amount of effort to witness the spectacle in person.

That second group included the trio of Michigan State students who said they’d decided to head down from Lansing because “there was nothing better to do,” two guys from Detroit wearing identical flame-covered shirts originally purchased for Guy Fieri Halloween costumes, and another duo sporting actual costumes mimicking (what else?) a bag of Cheetos and a can of Mountain Dew who said it took them a couple of hours to get there.

The fact that Hell is essentially comprised of the three buildings that house the aforementioned businesses means it was fairly easy for Mountain Dew to infiltrate the entire town during the temporary takeover, which included the tweaks it made to the menu at the Hell Hole Bar and Diner with Action Bronson’s help. 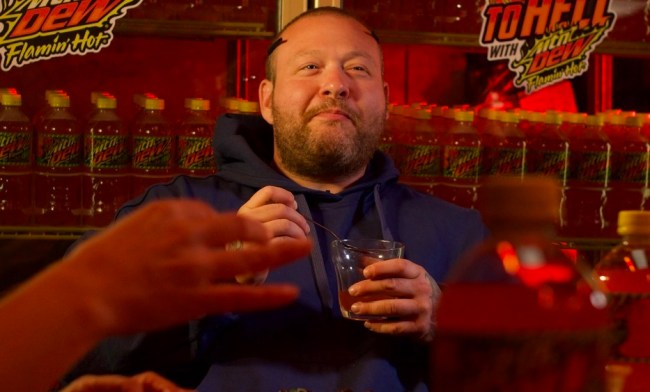 The Queens native has never strayed far from his roots as a chef since making a name for himself as a rapper. He spent years sampling fare around the world as the host of F—k That’s Delicious, and his lyrics are peppered with nods to the various foods and dishes he namedrops with a frequency that’s only rivaled by the random assortment of the largely forgotten athletes he regularly references.

The MC didn’t have to stop and think when he rattled off a quintet of former MLB players when I got the chance to chat with him and asked about how those seemingly random names end up in his tracks:

All those players, I still have all those cards. I flip through them endlessly for hours and hours.”

He cited a similar thought process while discussing the inspiration for the dishes he created for the event—all of which incorporated a Flamin’ Hot element:

“I love to think. I sit around all day and think about recipes. I like to infuse things. I like to try different flavors, and this is just right up my alley.”

This was actually the second time I’d had the chance to chat with the rapper. Shortly before we reconnected, I’d listened to an interview with Alchemist, the legendary producer who comprised one-half of the short-lived hip-hop duo known as The Whooliganz alongside none other than actor Scott Caan.

Alchemist said Caan not only hopped in the studio to record a track with Bronson at one point but claimed he “bodied” his counterpart. As a result, I couldn’t miss out on the chance to have Bronson confirm its existence, which led to a couple of other surprising revelations:

“Oh, it exists. It was actually on the “Latin Grammys” beat. That might be a remix we drop.

From there, I headed to sample the creations he’d dreamed up. That included one of the more unconventional things I’ve ever eaten: sushi-grade tuna garnished with sesame seeds and scallion served atop Flamin’ Hot Doritos (which worked much better than it had any right to). 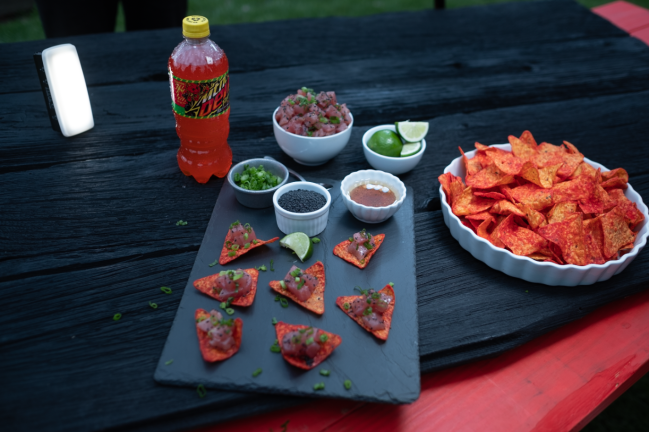 There were also some fantastic short ribs glazed in “MTN DEW Flamin’ Hot Sticky Sauce,” which were fire in multiple senses of the word. 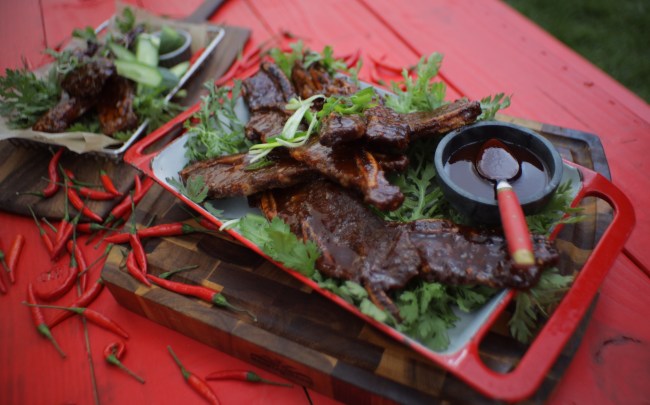 I was more than fueled up for my next stop: a chat with Pauly D, who confirmed Hell was near the top of the list when it comes to the strangest places he’s ever DJed:

“It’s up there with Saskatchewan. It’s one of those places you never think you’ll end up, but you never know. Sometimes those are the best places to go. You don’t know until the crowd gets there.

I try to prepare for the vibe. I think I know what I’m going to play until I see them. They really tell me what to play. I feed off of their energy. Sometimes I’ll be like ‘Oh, it’s going to be heavy on hip-hop’ and then I go in and it’s all dance. ”

Pauly D may have risen to fame thanks to his role on Jersey Shore, but he’s a Rhode Island native who spent his early years honing his DJ skills at the clubs that fostered the state’s surprisingly vibrant scene—one he fondly reflected on when I mentioned one bygone venue in Providence after discovering this wasn’t the first time he’d perform in a Hell prior to our chat:

“Club Hell. Yeah, wow, what a throwback. For such a small state, the nightlife was huge. It was so lit. People from Boston would come down to Rhode Island every single weekend.

Club Ultra was one of the biggest nightclubs—it could fit a few thousand people—and for us, it was huge. It was like the biggest venue ever. I was doing that but I was also doing small bars where it was all rock ‘n roll. I would also do a hip-hop show. Another was all dance music.

I think that’s why I’m able to play a little bit of everything today: because of back then.”

He’s certainly come a long way since then, which obviously had just a bit to do with the pop culture phenomenon that propelled him to stardom. He’d be the first person to admit it’s pretty unlikely he’d have multiple Las Vegas residencies under his belt without Jersey Shore, and he shared some great insight when I asked how he grapples with the reality that he’ll always be known for the reality television show more than anything else despite the many doors it opened:

I feel truly blessed to have this opportunity and to be able to live out my dream. There’s some good and there’s some bad. Living your life publicly and everybody knowing everything about all of your business; that’s the bad.

The good outweighs the bad, though. I’m able to tour the world now, and that’s what I love to do—even if it comes with a little bit of hate online or people prying.”

What may be the largest crowd of people to ever assemble in Hell had gathered in front of the stage by the time Pauly D took the stage for what had to be one of the most exciting spectacles the town has ever seen based on the surge of energy that accompanied his arrival and electric atmosphere that rarely wavered over the course of the set.MTN Dew

You also have to hand it to Pauly D, who brought the same amount of energy to a random field in the middle of rural Michigan that you’d expect from a DJ performing to a packed house at TAO or LIV.

He managed to set the perfect vibe with a mix of club staples while incorporating on-brand songs like “Highway to Hell” along with a nod to a certain musical icon from Michigan with “The Real Slim Shady,” which garnered the most electric reaction of the night (the mix also featured a subtle—if unintentional—allusion that checked a couple of boxes thanks to the oft-sampled “The Roof Is on Fire,” which B-Rabbit’s crew chanted after torching an abandoned house in 8 Mile).

@DJPaulyD Repping @Eminem in Hell Michigan at the mountain dew flamin HOT promo this was so ama,amazing. I appreciate the love for eminem to he's my all time favorite rapper forever. #mountaindew #djpaulyd #Michigan pic.twitter.com/CV2eEMKUz6

I can only assume I was far from the only person who was primarily motivated took to make the trek to Hell on this occasion due to the sheer novelty; I don’t know how it’s possible to not be at least somewhat intrigued by an event featuring two seemingly random celebrities who were recruited by a soda brand after it announced its plans to transform an entire town for a day.

Did I occasionally ask myself questions like “What the hell is going on?” and “Why does this even exist?” after attempting to digest the surreal nature of the entire spectacle over the course of the visit? I’d be lying if I said I didn’t, but I’d also be lying if I said it wasn’t one hell of a good time.