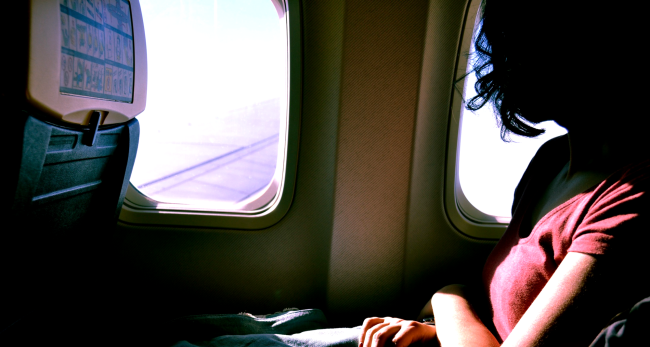 Flying is the worst. You know it. I know it. We all know it. If it weren’t just so dang much faster than other forms of transportation many of us would never set foot on an airplane again.

Furthering this belief is something a flight attendant named Linda Ferguson, who worked as part of a cabin crew for 24 years, shared some of the perils we unknowingly face when we rest our heads on a plane window.

I say “we” because who among us has flown in the window seat of a plane and not put our heads on the window for a little well-deserved respite?

According to Linda you probably shouldn’t rest your head against a plane window because who knows how many people have sneezed, coughed, or done God knows what on that window during flights that came before yours.

“I see plenty of people carry Lysol wipes with them that will wipe the area around their seat. If there was a backlight and they could light up a plane with all the germs, I think it would petrify everybody. My rule of thumb, and I never get sick, is I never put my hands in my mouth or near my face.”

This particular travel tip was part of a Reader’s Digest list of things that you should never do on an airplane that literally everyone who flies should read…right…now. (Ironically, a different Reader’s Digest list, published just a couple of months prior, highly recommended the window seat “because you can rest your head on the window, either with or without a pillow.” Yechh.)

Other important tidbits of air travel advice that were shared on this list included things like a warning not to walk around in the plane barefoot, which really should go without saying, and yet…

“We see people walking from their seats into the bathrooms all the time barefoot and we cringe because those floors are full of germs,” says Ferguson.

Ferguson also suggested steering clear of asking for ice in your drink because “water tanks on an airplane are old and they’ve tested them and bacteria is in those tanks. I would definitely drink bottled water — that’s why they hoard tons of bottles on an airplane.”

She also recommends not eating any food that has touched your tray table. (Obv.)

Other things to avoid when traveling on an airplane? The blankets, coffee or tea (for the same reason as avoiding the ice), wearing shorts (think about it), and touching basically anything inside of the bathroom.

All of this is certainly something to keep in mind as the world (hopefully) gets closer to being back to normal which, in turn, means many more of us will be making our way back to airports and taking flights all over the place.