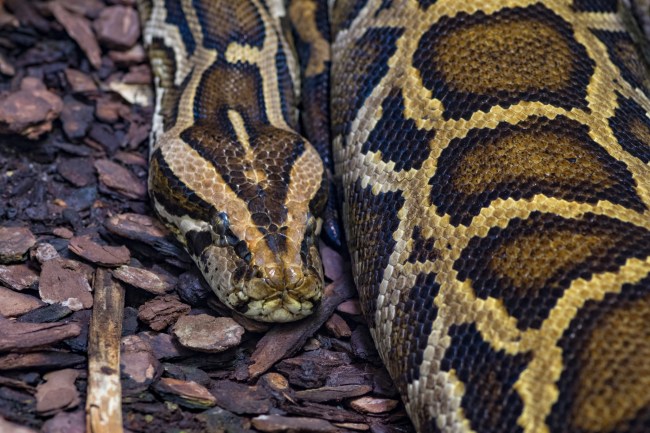 Those invasive pythons, man, they’re everywhere throughout south Florida these days. It’s unclear *where* exactly they came from but the conventional wisdom suggests they were let loose by some sort of exotic animal trader before/during a hurricane. This was decades ago.

These invasive pythons immediately took to the swampy climate of the Florida Everglades and started breeding like rabbits. They’re nearly impossible to find because of the dense vegetation unless you’re lucky enough to find one sunning itself on a road or concrete during a hot day. But that’s because our human eyes aren’t developed for finding camouflaged snakes.

I don’t know much about the eyesight of alligators but I know this massive gator in the Florida Everglades was sharp enough to find this gigantic python and take it down in a scene that looks like some sort of dinosaur battle straight out of Jurassic Park.

This video was originally shared by Rich Kruger on Facebook but has since made its way to YouTube and I’ve included both versions of the video for you below:

Check out this gnarly photograph:

According to Fox News, Rich Kruger encountered this alligator eating the massive python on Monday morning near the Shark Valley Visitor Center in Miami-Dade which is just off US-41 and inland from Miami. For some reason, these invasive pythons haven’t flourished nearly as much in Central and Northern Florida and personally, I love it that way. I’m in Sarasota, FL these days and the last thing I need is a 10-foot python trying to eat my 100-pound Bernese Mountain Dog.