Florida Man Arrested For Trying To Get Drunk With An Alligator, As One Does 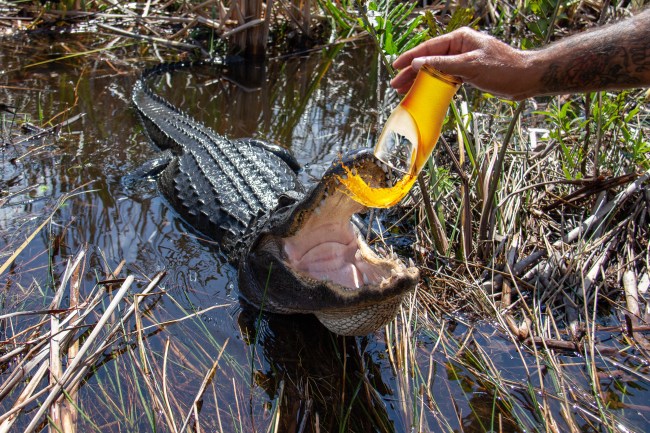 Just because Hot Girl Summer is over does not mean that we’re done preposterously naming our seasons, as we are now steamrolling into Florida Man Fall.

You see, while Florida Man’s peak months of operation are during the sweltering months of the summertime, the sun never sets on the insanity of Florida Man, as they engage in typical Florida Man madness throughout the entire year.

Take this Floridian Sherlock Holmes and Dr. Watson, who were arrested for allegedly trying to get drunk with an alligator.

According to TC Palm, 27-year-old Timothy Kepke and 22-year-old Noah Osborne were arrested for “unlawfully taking an alligator” after they allegedly attempted to pour beer into its mouth.

Timothy Kepke, 27, of the 6200 block of Southeast Croton Place in Hobe Sound and Noah Osborne, 22, of the 3000 block of South Kanner Highway in Stuart were both arrested Oct. 3 on one felony charge each of unlawfully taking an alligator.

In August, Florida Fish and Wildlife Conservation Commission got a complaint about Kepke holding an alligator and enticing the reptile to bite his right forearm and then pouring beer in the animal’s mouth. After the beer is poured, the alligator aggressively reacts. The interaction was filmed, records show.

Sure, the rest of us party, but have you ever partied with a DEADLY FUCKING ANIMAL?! Didn’t think so, losers. Now shut up and chalk up another point to Florida.