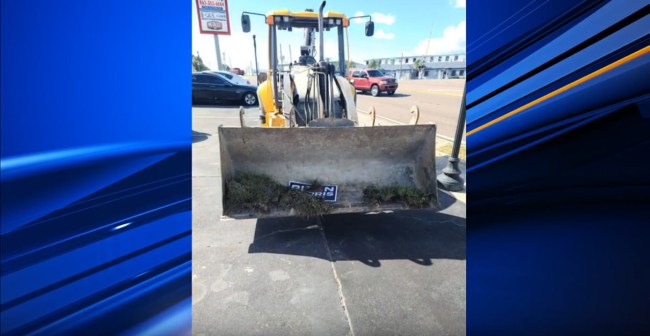 Listen, we get it. We really do. Enough with all of the political signs in people’s yards. But this probably isn’t how you want to try to remedy this situation.

26-year-old James Blight is accused by Haines City, Florida police of stealing a bulldozer from a construction site and driving it into a residential neighborhood just so he could knock down the political campaign signs of Joe Biden in the front yard of the city’s Vice Mayor Adam Burgess.

“This man came onto my property, took the two Joe Biden signs I had in my yard and them came back with a bulldozer to run down my fence,” said Burgess.

Resident Cornelius Marion told Spectrum Bay News 9, “He stopped traffic and cussed everybody out. There were four signs on H Street, he took the front loader and dug them up.”

According to police, Blight told them when he was arrested, “I’ve been drinking whiskey all day and don’t remember what happened.” He also stated that he did not know how to operate the dozer.

Spectrum News also reports that his claims of being drunk may be dubious because Haines City police did not perform a sobriety test on Blight because officers at the scene said he was, in fact, not drunk. [Just from Florida.]

“It’s absurd that a grown man could think he had the right to destroy someone else’s property based on a difference in political opinion,” said Haines City Police Chief Jim Elensky. “The fact that he was driving this heavy equipment, that he did not know how to operate, down busy roads could have been disastrous. We’re thankful that no one was hurt in this matter.”

Blight is charged with trespassing on a construction site, grand theft and criminal mischief of $1,000 or more.