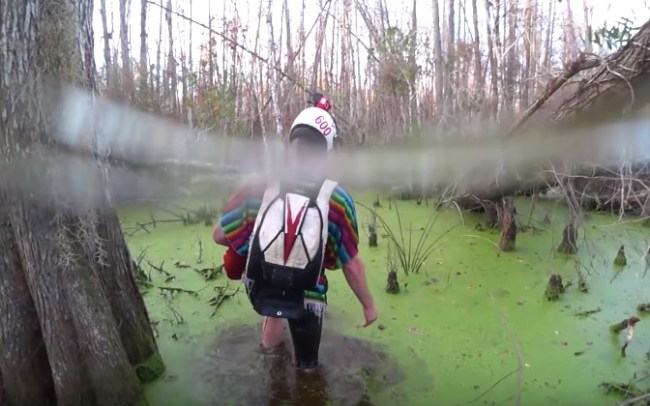 Skydiving is always risky. You can rupture a disk in your back when you pull the ‘chute (happened to a friend of mine). There’s the possibility that your primary parachute doesn’t open and you’ll be forced to scramble for your backup (happened to my dad). Or you can jump too early or too late and miss your drop zone like these 8 adrenaline junkies from Florid did.

This clip was taken on New Year’s Eve and it’s actually a compilation of footage from several cameras. There were 8 friends doing a jump together in Florida and they all missed their drop zone with several of them crash landing into the trees and swamp.

The first part of this video is from the camera of Lane Paquin as they crash into a thick green swamp and barely miss getting impaled on a jagged tree. Then the video cuts to footage from the other jumpers and shows them struggling to avoid injury as they all miss the open field they were initially aiming for. The action kicks in around the 1:45 mark if you want to jump ahead in the video or you can watch the full clip for the buildup.

I’ve never been skydiving myself. I want to go but I’ve always said I want to do it in Panama where you can jump in the middle of the country and have unencumbered views of the Caribbean and Pacific for a while.

I missed my chance to do this years ago when I studied abroad at FSU’s Panama City, Panama campus but I’m pretty confident I’ll get back there one day to make this dream a reality. I just hope that I don’t somehow land smack dab in the middle of a damn rainforest dangling from trees like that person around the 5-minute mark of this video.