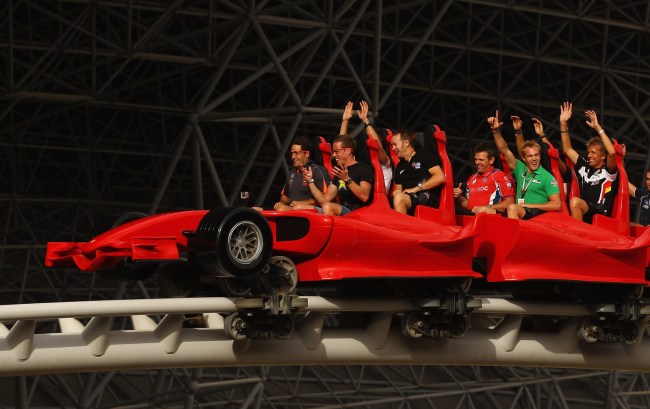 While we are still waiting for a Ferrari-based theme park to come to the United States, Ferrari World over in Abu Dhabi is just boppin’ along with the world’s fastest roller coaster, the Formula Rossa.

Can I just say how freaking appropriate it is that a Ferrari-themed roller coaster is the world’s fastest? Nicely done, Euros.

Anyhoo, Ferrari World, and not Disney World, sounds to me like “The Happiest Place On Earth.”

First of all, it is located on Yas Island, which for anyone who has played Forza Motorsport on their Xbox with any regularity knows, is the home of the Yas Marina Circuit, which has hosted the Formula One Abu Dhabi Grand Prix since 2009. So right there I already want to visit.

Second of all, in addition to the Formula Rossa roller coaster, check out some of these other rides and attractions located on grounds of Ferrari World.

Sounds like a blast, right? Well, since most of us won’t ever be able to travel over to Ferrari World over in Abu Dhabi the next best thing these days is to do it in virtual reality. I mean, why spend thousands to do anything anymore when VR exists, am I right?

Take a virtual spin on the Formula Rossa here (the video below) and try not to blow chunks as you hit a top speed of 150 mph.

According to Wikipedia, the Formula Rossa roller coaster “accelerates to its top speed in five seconds using a hydraulic launch system which generates a release velocity similar to that of steam catapults on an aircraft carrier.”

Riders experience up to 1.7 g of force during acceleration and up to 4.8 g throughout the ride. The roller coaster track is 2.2 km (1.4 mi) in length, ranking it sixth in the world for steel roller coasters. Its shape was inspired by the legendary Italian racetrack Autodromo Nazionale Monza. Due to the high air speeds and thus risk of an impact with airborne particulates or insects, all riders are required to wear protective glasses similar to those used during skydiving.

Here’s another look at what riding the Formula Rossa does to your body.

Here’s how the ride was made.

And here’s a vlog showing many of the other attractions at Ferrari World that I mentioned.

I haven’t even been to Ferrari World yet and I already think this place should be listed among the Top 10 Amusement Parks in the World.