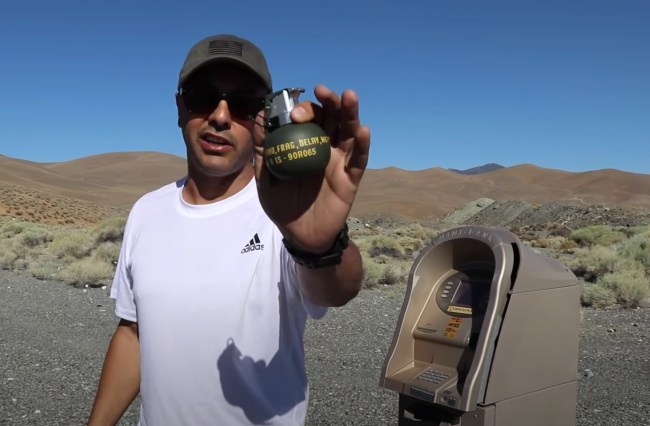 I have sort of always had it in my head that ATM machines are completely indestructible and I suspect that I’m not alone in thinking this. It’s what the banking industry wants us to believe, right? If everyone thought that ATM machines were easy to bust up then there would probably be some serious problems for the banks.

Alas, Edwin Sarkissian puts the speculation to rest when he drops an M67 Fragmentation Grenade inside of this ATM to test just how strong the structures really are. Normally for an experiment like this, he would rig up a trigger with a string so he could remotely drop the grenade while he was far away behind a protective shield of some sort but he threw caution to the wind for this one.

He says he’ll have about five seconds from the time he drops the grenade into the ATM to run as fast and far as he possibly can before hitting the ground hoping he doesn’t get wrecked by shrapnel. This is the part of the entire clip that had me the most nervous. So many things could’ve gone wrong at that moment that he was hauling butt away from the ATM but it all worked out in the end.

The action in this video starts around the 2-minute mark so you can jump ahead if you’re interested in getting straight to it:

The ATM never stood a chance. I don’t know why I’ve given ATMS so much benefit of the doubt over the years. Obviously, if there was any cash in there it would’ve been completely destroyed and this would never be a ‘practical’ way to break into an ATM but I at least thought some of the machine would remain intact.

This reminds me of Edwin Sarkissian‘s recent video where he tested an M67 Frag Grenade against a Bomb Suit used by bomb squads. The test was to see if those suits actually hold up to a grenade explosion. I will say the suit does a lot better than the ATM. You should also check out this recent clip of a Crossbow vs. SWAT Shield test.

Here’s another excellent clip of what happens when you attach a grenade to a propane tank, something that’s certainly crossed my mind more than once over the years: