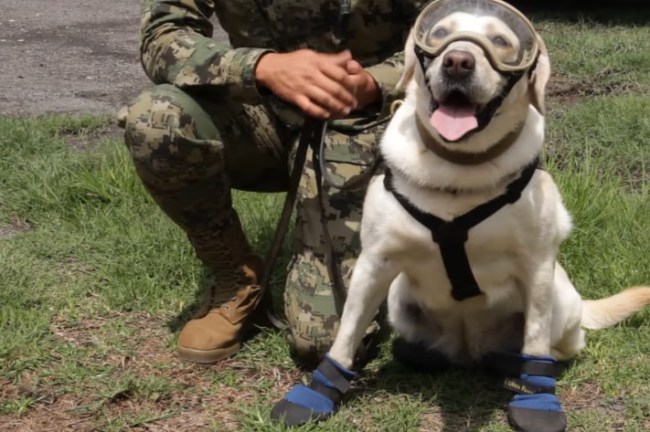 The death toll to Tuesday’s horrific 7.1 magnitude earthquake that smashed Mexico City continues to rise and the latest tally said there were 273 casualties. The outpouring of strength and resilience to find any and all survivors have been tremendous. Included in the tireless rescue effort includes one very, very good girl – a rescue dog named Frida.

Frida the Labrador has been praised by Mexico's president for her bravery in rescuing earthquake victims pic.twitter.com/mfUFwEUhAj

Frida, a Labrador retriever who is named after painter Frida Kahlo, serves in the Mexican navy (SEMAR). The canine rescuer has served her country magnificently, especially in recent times when natural disasters have devastated Mexico. Earlier this month, Frida bravely ventured into decimated buildings in Oaxaca after a powerful 8.1 magnitude quake destroyed the area. Frida is now in Mexico City helping to find survivors who are trapped in debris from the collapsed structures. Frida is an international star and has been deployed across Central and North America, where she has participated in rescue missions in Haiti, Ecuador, and Honduras following natural disasters.

The office of the president of Mexico honored Frida’s courageous actions.

The internet loves Frida and she has gone viral in the past few days, some people even think that the special doggo should run for office. Dressed in goggles (doggles?), a khaki padded waistcoat and all-terrain boots, Frida gallantly searches for humans buried in the rubble.

Frida (left) and Evil (right) these are the two doggies who saved the life of 52 people in Mexico earthquake pic.twitter.com/YuXznUXHDH

Notice you don’t see many stories of cats saving people?

There are conflicting reports on how many people Frida has actually saved in her career. The Los Angeles Times reported the “7-year-old Labrador has detected 52 people — 12 alive — in various natural disasters.” The Telegraph as well as other news outlets have reported that Frida had saved “52 lives during her career.” Whether Frida has saved 12 or 52, that’s more lives saved than anyone that I know.