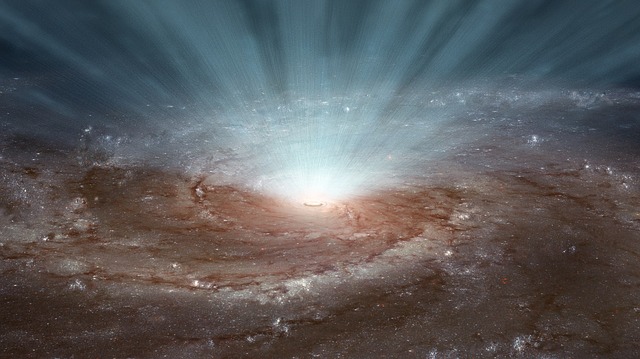 Kiss Uranus goodbye because there is a cataclysmic space event a-comin’. The Milky Way galaxy is expected to be changed forever when a nearby galaxy collides with our galaxy and rips open a supermassive black hole. But on the bright side, the catastrophe that will end worlds will look really cool in the process. So there’s that, which is nice.

On January 4th, a new scientific paper was published in the journal Monthly Notices of the Royal Astronomical Society that predicts were are on a collision course with the Milky Way’s nearest cosmic neighbor and that is a teensy problem.

The Large Magellanic Cloud (LMC) is a dwarf satellite galaxy that is near our Milky Way galaxy and it could nudge us in a real bad way. The spiral of dust and stars is about 1/20th of the size of the Milky Way, but that doesn’t mean that it can’t end our precious existence in a split second. The Large Magellanic Cloud is approximately 160,000 light-years away and has a mass of about 10 billion suns. Scientists believe that the LMC will collide into the Milky Way which will rip open a dormant black hole.

The Milky Way’s dormant black hole is known as Sagittarius A*, but if it is awakened it will disrupt anything and everything in the vast nearby area. By using a supercomputer collision simulator called “EAGLE,” scientists predict that the black hole will release cosmic radiation and will instantly obliterate some stars while tossing other stars quadrillions of miles out of orbit according to a team of astrophysicists at Durham University in Britain.

Some stars could crash into each other causing unimaginable cosmic explosions that vaporize planets and anything else in the vicinity. Some stars will be flung into the center of the Milky Way. The black hole will devour all of the gas in the area and expand to 10 times its original size.

“The destruction of the LMC, as it is devoured by the Milky Way, will wreak havoc with our galaxy, waking up the black hole that lives at its center and turning our galaxy into an ‘active galactic nucleus’ or quasar,” the study said. If the supermassive black hole transforms into a quasar, one of the brightest objects in the universe, we would get quite the light show. Quasars occur when a supermassive black hole consumes and then regurgitates celestial matter at near-light speed and it would “spew out immense amounts of energy at all wavelengths.”

Quasars emit light that is up to 100,000 times brighter than the entire Milky Way galaxy, which would make for quite the show. Grab your telescope and popcorn because this cosmic event will be a magical sight to behold. The collision will be “a spectacular display of cosmic fireworks as the newly awakened supermassive black hole at the center of our galaxy reacts by emitting jets of extremely bright energetic radiation,” according to co-author Carlos Frenk.

Now don’t get too worried because you won’t be around when all of this cosmic chaos goes down. Astrophysics believe this celestial collision won’t happen for another two billion years. “While two billion years is an extremely long time compared to a human lifetime, it is a very short time on cosmic timescales,” said lead author Dr. Marius Cautun, a postdoctoral fellow in Durham University’s Institute for Computational Cosmology.

If you are alive in two billion years, you can rest easy to know that this massive collision probably won’t affect our sun or endanger life on Earth or whatever is left by then. That impact is roughly two to three billion years sooner than the expected collision between the Milky Way galaxy and Andromeda Galaxy, our nearby neighbor. The collision between the Milky Way and Andromeda is expected to be a very dire situation for everything in both galaxies. So relax, you’ve got at least four billion years until everything is obliterated.