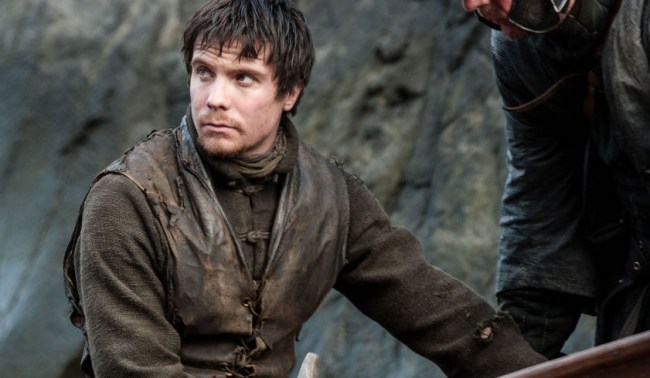 During the third season of Game of Thrones, Gendry— the only remaining bastard son of King Robert Baratheon and the apparent heir to the throne that characters are playing games for— learned that he was about to become a human sacrifice. Thanks to the help of Ser Davos, he escaped this fate by jumping into a row bow and sailed quietly into the night before popping up four seasons later after propelling himself with oars for an unspecified amount of time and (presumably) feasting on copious amounts of fermented crab while at sea.

I’m sure Joe Dempsie— who plays the character on the show and who is (presumably) a big fan of both acting and money— was thrilled to be invited back for the seventh season, which featured Davos being sadly able to convince Gendry to use “Clovis” as a fake name. Dempsie is also apparently slated to return for at least one of the last six episodes of the show, which is currently filming ahead of its scheduled return in 2018.

Plenty of actors on the show have already aired their feelings about the final season, and some people have described how the cast reacted after learning the fates of their characters (and coming to reality with the fact that their contract won’t be renewed). HBO is taking extra precautions to prevent people from spoiling the upcoming episodes, but they certainly aren’t getting any help from Dempsie when it comes to keeping people quiet.

“I remember getting to the end of that final episode and knowing that that was it, there wasn’t gonna be any more Game Of Thrones, and the idea that I have to now carry that around in my head between now and 2019 when it comes out…I’m gonna be drunk at various points! I don’t know if I trust myself.”

To all Game of Thrones fans out there: if you see Dempsie in a bar in the next year, you know what to do.