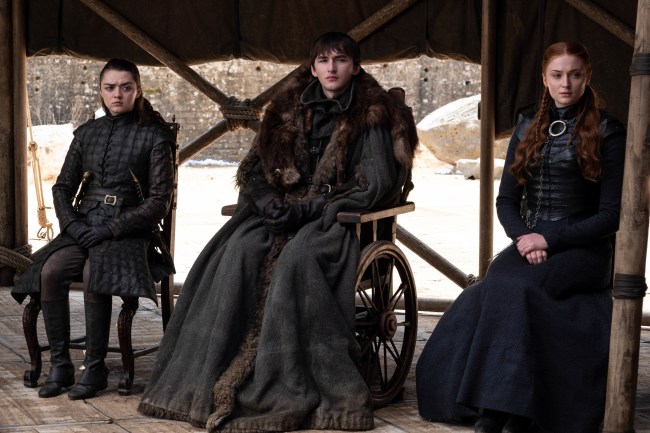 Anyone else just notice the raven on Ned’s right from the season one poster??? Raven + Ned Stark on the Iron Throne = Bran Stark. It was in front of us THE WHOLE TIME. #GameOfThrones pic.twitter.com/zlkK18jlfP

While Eddard Stark never sat on the Iron Throne in the TV show, his son Bran did become the Ruler of the Six Kingdoms (formally Seven Kings). Bran wasn’t able to sit on the actual Iron Throne because Drogon melted it, but Bran has his own chair so he’s good. Whether the raven in the poster is a reference to Bran and the Game of Thrones writers knew the ending of the TV series in Season 1 is certainly debatable.

Another clue at the ending of Game of Thrones came in the well-documented vision that Daenerys Targaryen (Emilia Clarke) had in Season 2. Dany had a prophetic vision in Season 2 where she enters the Red Keep or what’s left of it and walks towards the Iron Throne.

When Dany is just about to touch the Iron Throne, she hears her dragons screaming and leaves the Throne Room in King’s Landing. The Mother of Dragons leaves the Red Keep and is suddenly transported to North of The Wall. That is where she finds her husband Khal Drogo and their child who didn’t survive childbirth.

This may have been a hint that Khaleesi was going to die after coming so close to sitting on the Iron Throne. Instead, her boyfriend/nephew/advisor Jon Snow (Kit Harington) plunged a dagger into her chest and she died in the Throne Room, only feet from the Iron Throne.

Was the vision showing that Dany died after coming so very close to ruling Westeros only to be murdered at the Iron Throne? Did the vision mean that Dany went to heaven and was reunited with Drogo and their child who died?

Here’s a side-by-side video of Dany’s vision of the Iron Throne in Season 2 compared to her actual walk into the Throne Room in Season 8.