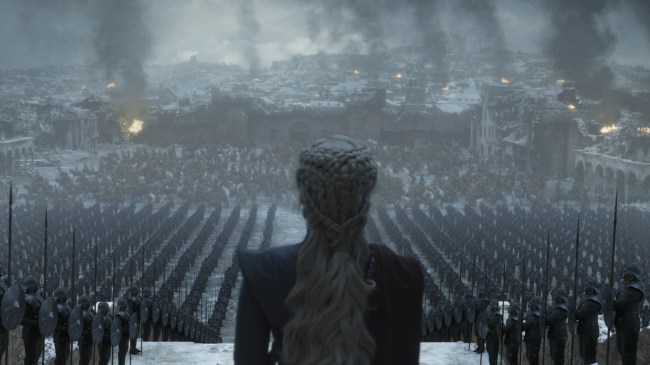 A week after getting destroyed with horrible reviews, the Game of Thrones finale was inundated with negative critiques. The silver lining is that HBO enjoyed incredible all-time great TV ratings for the network.

The fans have spoken — they hated the Game of Thrones finale. Close to 100,000 fans overwhelmingly downvoted the series finale, giving Episode 6 of Season 8 a rating of 4.5 on IMDB. The episode titled The Iron Throne scored lower than other Season 8 disappointments — Episode 4 The Last of the Starks with a 5.9 rating and Episode 5 The Bells that had a 6.5 score.

That’s the lowest-rated episode for Game of Thrones on IMDB, which has been extremely generous to the TV show and given the series an overall rating of 9.5. The fans despised Season 8 and the five worst-rated episodes were all from Season 8, which only had six episodes. The only other Season 8 episode, A Knight of the Seven Kingdoms, was rated as the seventh-worst episode in the history of the series.

The reviews weren’t much better on Rotten Tomatoes. This week’s The Iron Throne received a score of 56%. Last week, The Bells episode earned the fantasy show’s worst ratings in eight seasons on Rotten Tomatoes, tying Unbowed, Unbent, Unbroken Air episode from Season 6. Both of those episodes were given a 54% score on Rotten Tomatoes, a dreadful rating for the show that has a 91% score from the average Tomatometer. Episode 4 of Season 8, The Last of the Starks, received a RT score of 58%.

For HBO, the TV ratings were a different story than the putrid reviews. This week’s Game of Thrones episode was HBO’s biggest audience ever for Sunday’s series finale. Despite the negative reviews, HBO enjoyed 13.6 million viewers according to preliminary Nielsen ratings. That sets the record for HBO, beating out the Season 4 premiere of The Sopranos, which had 13.4 million in 2002.

Things get even better for HBO once you factor in online viewing. The Game of Thrones series finale had a whopping 19.3 million viewers on all platforms, which includes HBO GO and HBO Now. This surpasses the previous record-holder, last week’s GoT that had 18.4 million total viewers and the number will go higher with more people catching up this week or rewatching.

While the ratings are a spectacular achievement for HBO, the network must also be concerned by the negative backlash by fans because that could carry over to HBO’s upcoming Game of Thrones spinoff(s), which could mean diminished viewership.