Sophie Turner Hasn’t Seen The Finale Yet, Calls ‘Game Of Thrones’ Petition ‘Disrespectful’ And Was Her Tattoo A Hint? 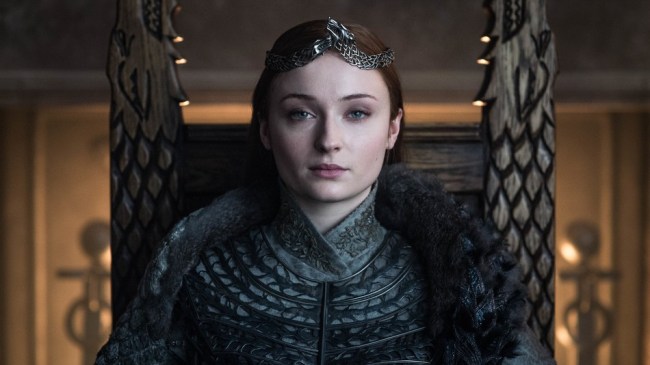 Season 8 was generally hated by such a large portion of the GoT fanbase that there was a petition created to have Season 8 remade with competent writers. The petition on Change.org went viral and has garnered over 1.4 million signatures.

Sophie Turner gave an interview to the New York Times and addressed the criticisms and the petition, which she called “disrespectful.”

“Honestly, I’m not surprised,” Sophie said of the overwhelmingly negative response to the final season. “People always have an idea in their heads of how they want a show to finish, and so when it doesn’t go to their liking, they start to speak up about it and rebel.”

“The thing about Game of Thrones that’s always been amazing is the fact that there’s always been crazy twists and turns, right from Season 1 with Ned’s beheading,” Turner continued. “So Daenerys becoming something of the Mad Queen—it shouldn’t be such a negative thing for fans. It’s a shock for sure, but I think it’s just because it hasn’t gone their way.”

Then the Game of Thrones actress gave her opinion about the Change.org petition that has gone viral. “All of these petitions and things like that—I think it’s disrespectful to the crew, and the writers, and the filmmakers who have worked tirelessly over 10 years, and for 11 months shooting the last season,” the actress stated.

“Like 50-something night shoots. So many people worked so, so hard on it, and for people to just rubbish it because it’s not what they want to see is just disrespectful,” Turner said.

Sophie was happy with how her character became the Queen of the North. “I loved it. It’s the only place that she really, truly feels safe,” Turner explained. “It’s the place that she’s the most capable of ruling. She would be a fair and loving ruler, and it’s what she’s been striving for this whole series: to go back home, to protect her home. And finally she has that.”

Turner also addressed the controversy of how Bran Stark won the game of thrones and was nominated as the new Ruler of the Six Kingdoms. “King Bran the Broken. I suppose it was unexpected but it makes a lot of sense,” Sophie said. “The best way for us to move into the future is to look at our past and try to not make those mistakes that we did in the past. And he’s the one person that knows everything, so it does make sense. It feels like he would be an incredibly fair ruler.”

Probably the most surprising part of the interview was that Sophie Turner hasn’t actually seen the Game of Thrones finale. Over 19 million people have already watched the final episode of Game of Thrones, except one of the biggest players in the game of thrones.

“I haven’t actually watched it yet because I was alone when it came out, and I truly can’t be alone to watch it,” Sophie said. “But I read the script and I acted in it, so I kind of know what happens.” Translation: Even Sansa Stark knows the Game of Thrones finale was trash and is not worth wasting an hour and 20 minutes that could be doing something worthwhile.

In other Sophie Turner news, it appears her tattoo she got nearly a year ago was a hint to how Game of Thrones ended. In June of 2018, Turner got a tattoo of a direwolf on her arm with the words: “The pack survives.” The tattoo of House Stark’s sigil and the saying appears to have hinted at the ending of the hit show.

“The pack survives” is something Ned Stark told Arya Stark in the first season and something Sansa Stark said in Season 7. The pack did survive as Bran Stark became the Ruler of the Six Kingdoms, Arya went to explore what’s west of Westeros, Jon Snow avoided being beheaded by agreeing to join the Night’s Watch again, and Sansa is the Queen of the North. So the pack does survive, minus Rickon Stark, who could have been alive if just had zig-zagged.

RELATED: Think You’re Having A Bad Monday? Imagine Being One Of The 560 Parents Who Named Their Baby ‘Khaleesi’