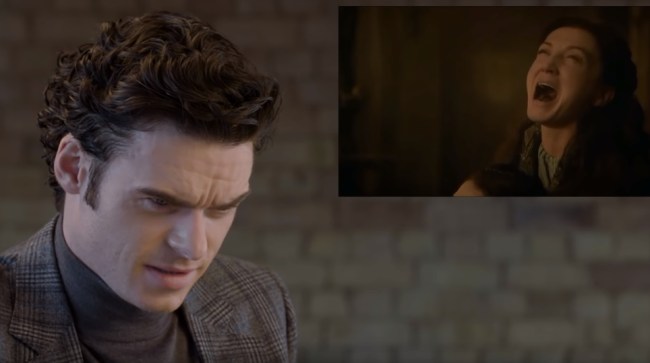 Richard Madden who plays Robb Stark re-watched the most painful (maybe second most gut-wrenching scene after Melissandre’s cruel sacrifice to R’hllor) Game of Thrones scene that has taken place in the first seven seasons — The Red Wedding. “I think it’s really rude you made me watch this,” Madden says before he watches the excruciating clip for British GQ’s Action Replay segment. *Plays The Rains of Castamere to start the misery*

Before re-watching Episode 9 of Season 3 of Game of Thrones, Madden says, “I’m actually quite nervous to watch this” because the last time he watched this heart-wrenching scene with Michelle Fairley who plays Catelyn Stark, they were both in tears. “Let’s hope I don’t cry today,” the GoT actor says. Madden remarks on how brilliant of an actress Fairley is.

Madden joked that the “arrows were in his body for days” and he knocked over everything. Madden points out that he was wearing a hydraulic pump that was supposed to spurt blood everywhere as he got stabbed in the stomach. However, the first take it didn’t work so great and gallons of fake blood filed his costume instead of spurting. Madden gives a lifehack as to how to remove pesky fake blood stains, he recommends using shaving cream.

After filming the tragic and violent scene, Madden rushed to the airport to make the last flight to London that day. However, when he was on the plane he was exhausted, covered in fake blood, and “sobbing very loudly” over his traumatic final scene in Game of Thrones. So he looked like someone who had just murdered his family and then took a flight to escape.

Here is The Red Wedding scene in its entirety.

Here is A Song of Ice and Fire writer George R. R. Martin watching people reacting with glee to Game of Thrones fans watching their favorite Stark characters get killed off like they were moths flying into a bug zapper.

Robb, don’t you’ll be happy to know that Arya Stark will avenge your death in Episode 1 of Season 7 when she uses her new-found skills to kill Walder Frey.

Madden also talked to British GQ about being the next James Bond. “Lovely. I’m more than flattered to be mentioned, for people to consider putting me in that role,” Madden remarks. “I’m very flattered and thankful. It’s a really brilliant thing to be in.”

Madden, who has read all of the James Bond books, has not ruled out playing the iconic secret agent. “I don’t want to curse anything by saying anything. I think that’s the curse of that. If you talk about it, you’ll curse it.”