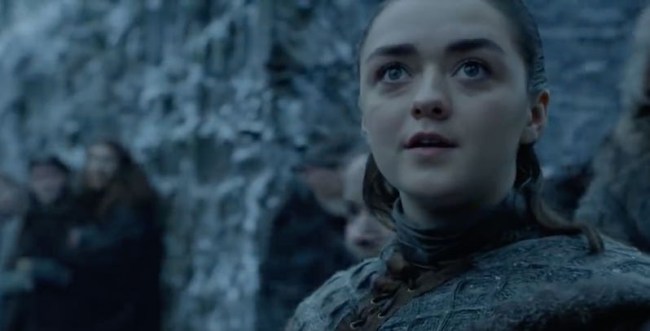 HBO gave a sneak peek at new series, new seasons, and new movies that they will entertain you with this year. But don’t get too excited because they are very limited peeks, to say the least.

Many speculated that the Oscars might be the time when HBO finally dropped the first official full-length trailer for the final season of Game of Thrones. That didn’t happen, but we did get a glimpse of Season 8.

Drogon swoops over Winterfell in the teaser and Arya is very, very awestruck, while other villagers are rightfully terrified. The army of the Unsullied also marches into Winterfell. And that’s it. That’s all we get for now. The sneak peek ends with ice zombie Viserion watching The Wall come crashing down with Daenerys Targaryen, Jon Snow, and Tormund all looking extremely worried.

The teaser also provides glimpses of new series such as Watchmen, His Dark Materials, Euphoria, Mrs. Fletcher, and The Righteous Gemstones that stars Adam Devine, John Goodman, Danny McBride, and Cassidy Freeman as a family of famous yet dysfunctional televangelists. There is also a new mini-series titled Chernobyl.

RELATED: ‘Game Of Thrones’ Fan Theory Says An Army From The North Will Save The Starks From The Night King

You also get a look at the upcoming Deadwood movie. Timothy Olyphant reprises his role as Seth Bullock where he tells Ian McShane’s Al Swearengen in the Gem Saloon. “My job ain’t to follow the law, Al. My job is to interpret it,” Bullock says. Seth is also scaring folks by wielding a gun outside Star & Bullock Hardware. The Deadwood movie started shooting last October, but no official release date has been given yet.

Another new HBO film is O.G. starring Jeffrey Wright from Westworld, who “portrays a maximum-security prison inmate whose impending release is upended when he takes a new arrival under his wing.”

Current HBO shows with new seasons coming in 2019 include Ballers, Big Little Lies, Succession, and the final season of Veep.

The final six episodes of Game of Thrones premieres on HBO on Sunday, April 14th.