‘Game of Thrones’ Twitter Tweets “Winter Is Coming”, Is Immediately Attacked By All Seven Kingdoms Of The Internet 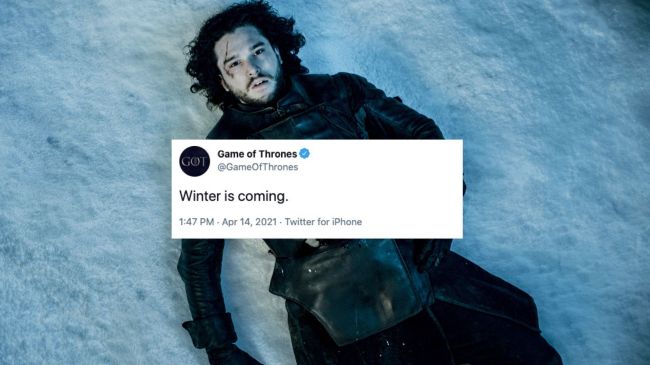 If you’re a big-wig suit at the HBO HQ, the response to The Iron Anniversary has to be slightly concerning, to say the least.

First, a quick refresher: earlier this month, with the 10-year anniversary of Game of Thrones’ premiere arriving on April 17, HBO announced the launch of The Iron Anniversary, “a month-long celebration to commemorate the series, engage passionate fans, and ignite audiences’ excitement for the next iteration of the franchise, House of the Dragon.” Needless to say, it did not go well — fans are still quite justifiably angry about Thrones’ final season and are therefore far from prepared to dive back into the world of Westeros, whether that be looking backward at the series that started it all or forwards to what comes next.

Now, while I certainly respect that position, I also vehemently disagree, writing last week that allowing eight hours of TV to carry more weight than the previous ~65+ is a level of defeatism I simply cannot subscribe to. Yes, Game of Thrones’ final season deserves to be harshly judged (it is, without question, diabolically subpar), but so does the rest of the series. And when you judge Game of Thrones as a whole, you’ll remember that it was quite literally revolutionary television for a solid four to five years. There aren’t many pieces of pop culture you can say that about.

Nevertheless, despite my best efforts to change the narrative around Game of Thrones, former fans of the series are simply *not having it*. And all the power to ’em, because I find it patently hilarious. Anytime Game of Thrones pops up in fans’ consciousness or their Twitter feeds, it’s immediately rejected and dispelled. Just yesterday, after the Game of Thrones Twitter account simply tweeted “Winter is coming” (something that account has been doing for YEARS), “Season 8” started trending as fans began hoping the tweet was a sign that HBO was going to remake season 8. They did spend north of $70 million on The Snyder Cut, after all — why not fix Game of Thrones, too?

if HBO wants me to watch a Game Of Thrones spin off I want a personal apology for season 8. 12 pt font, double spaced, no funny business on the margins

Winter was coming for 7 fucking years and then disappeared in 15 minutes. Nobody fucking cares anymore. If you can give Zack Snyder $100 million for Justice League, u can remake season 8. https://t.co/UMdP2xBFY5

‘Season 8’ trends after fans troll the Game of Thrones account in response to their ‘Winter is coming’ tweet pic.twitter.com/06LaUfnC8R

Me seeing people wanting HBO to do a redo of Season 8 of Game of Thrones pic.twitter.com/scs7ENlFi3

You made us wait an extra year for a short and disappointing Season 8. pic.twitter.com/vY3QJgBcQU

thank god I didn’t start watching Game of Thrones until a month before season 8. If I had followed it for years….oh those men would have to see me outside

The poor intern who tweeted winter is coming for sure is backing their bags……. do you not remember season 8 queen pic.twitter.com/kJcR9PjyRA

You got some gottdamn nerve. It’s finally getting warm and you wanna poke ya lil nose out like we forgot season 8 already. GET A JOB. LEAVE US ALONE. https://t.co/oee0lRobpB

If you’re HBO, this continued vitriol towards the Game of Thrones brand has to be disconcerting. This is a network that has never made a spin-off of one of their shows, and now they have five — yes, FIVE — Game of Thrones projects in the works. And fans seem to want absolutely nothing to do with it.

Now, will the tune change when HBO drops a predictably fire trailer for House of the Dragon (literally, since the series is about the Targaryens)? Probably. But I’d wager that HBO was hoping that by now — nearly two years after Thrones wrapped up its final episode — fans’ anger would subside, and that has absolutely *not* been the case.