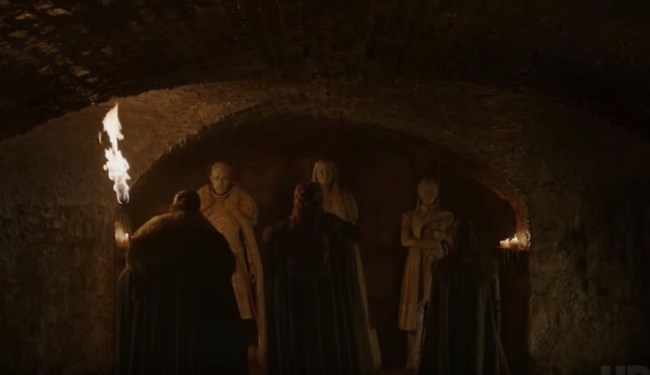 HBO released the premiere date for Game of Thrones Season 8 along with an intriguing teaser trailer featuring Jon Snow, Arya, and Sansa Stark walking through the ‘Crypts of Winterfell’.

The teaser trailer was pretty short, it showed three main characters we already know, and it took place in a familiar setting. So was there really a lot to unpack? It turns out there was. HBO crammed A LOT of backstory into these 90 seconds.

YouTuber AltShiftX released a video breaking down everything that most people missed in the ‘Crypts of Winterfell’ teaser trailer. I read all of the A Song of Ice and Fire books years ago, have watched every season multiple times, and I used to write recaps on the episodes back when HBO would still send out screeners of the show. I know this show pretty well but there’s still a decent amount of detail that I missed in this teaser. Here’s the clip with a recap in the text below.

Let’s recap, shall we? It opens up with Jon Snow walking through the Crypts of Winterfell where all of the past Starks were laid to rest, including Jon Snow’s mother. The way this scene is shot with Jon holding the torch is meant to depict him as Azor Ahai, the hero prophesized to kill the Night King using a sword named Lightbringer. It’s likely that Jon has this sword.

As Jon unknowingly walks past the statue of his mother, Lyanna Stark, a feather falls that was placed there all the way back in Season 1 by King Robert before he was killed by a boar while hunting and drinking. That feather was seen again in Season 5 when Sansa Stark picked it up.

Sansa walks past the statue of her mother, Catelyn Stark, who was murdered at the Red Wedding. Catelyn’s voiceover kicks in with a line from Season 3 where Cat said she’d made a promise to love Jon (Snow) but found that she couldn’t. She felt that broken promise put a curse on her family that caused all of the eventual death.

Jon then sees Ned Stark’s tomb….Side note: when the fuck were all of these tombs built when Winterfell has been changing hands and under attack for years? Who were building these tombs?…Moving on, when Jon sees Ned’s tomb we here a line about how he has Ned’s blood in his veins despite being a bastard. This is true because Jon is the son of Ned’s sister.

As pointed out in the YouTube video, all three voiceover lines refer to promises made to or about Jon. The big question here is when Jon will find out the truth about his parents, being a Stark-Targaryen and the rightful heir to King’s Landing and the Seven Kingdoms. The video says there are hints in the books that Jon will discover this from the crypts where he had fever dreams about the crypts.

I think it’s most likely that Jon learns the truth from Bran Stark because Bran knows everything. Or Bran transmits that knowledge to someone else who then tells Jon. This seems more likely than Sam telling Jon because Bran still holds as much importance as any character in the show.

Jon, Sansa, and Arya then see statues of themselves which is an obvious representation of their deaths. The cold fog comes in representing the coming of the White Walkers. That feather freezes which could mean the death of all life from the White Walkers. The narrator points out ‘All Men Must Die’ here is a logical end to the show and it’s very plausible that all three Starks will die this season.

The video then makes the claim that the reason Bran Stark is the only living Stark who isn’t in this clip is that he’s lost his identity as a Stark and has fully become the Three-Eyed Raven. I’m calling bullshit on this, they just didn’t want to overload the teaser.

Season 8 of Game of Thrones will premiere on Sunday, April 14. It’s the final season and everything will come to an end after a few long episodes. So everything’s speculation for now as to what all of this means and where it’s going. But this video did do a great job at unpacking the details in the teaser. Consider subscribing to AltShiftX YouTube’s channel for more!