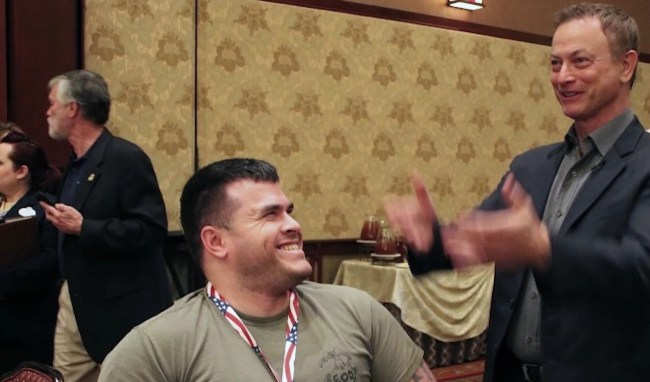 Ever since starring in the iconic role of Lieutenant Dan Taylor in 1994’s Forrest Gump, Academy Award-nominated actor Gary Sinise has developed a passion for giving back to American soldiers.

In addition to forming the Lt. Dan Band, a cover group that plays at military bases around the world, Sinise is also on the Advisory Council of Hope For The Warriors and founded the Gary Sinise Foundation. His foundation, which was created in 2011, has raised over $194 million for wounded veterans, first responders, and their families in the last decade.

While Sinise certainly doesn’t do any of his charity work for the sake of publicity, this video from AARP detailing how Sinise gifted a wounded veteran with a custom home is worth watching all the same.

While deployed to Afghanistan in 2011, U.S. Marine Corps Staff Sgt. Jason Ross stepped on a 10-pound improvised explosive device (IED). Ross survived the blast but lost both of his legs and a portion of his pelvic bone and required more than 240 surgeries. Shortly after his arrival stateside, Ross met the actor and advocate for service members Gary Sinise and his life took a new path that would lead to him receiving a home custom built for his needs from the Gary Sinise Foundation. [via AARP]

Since 2007, Sinise has won almost 20 honors for his humanitarian efforts, and with examples like this one, it’s easy to see why. Way to be, Gary, and thank you for your service, Marine Corps Staff Sgt. Jason Ross.

RELATED: Gary Sinise Gets Blindsided By An Emotional Thank You Video From Tom Hanks And Others For His Work With The Troops