‘Game Of Thrones’ Creator George R.R. Martin Was Denied His Request To Build A Seven-Sided Medieval Castle In New Mexico 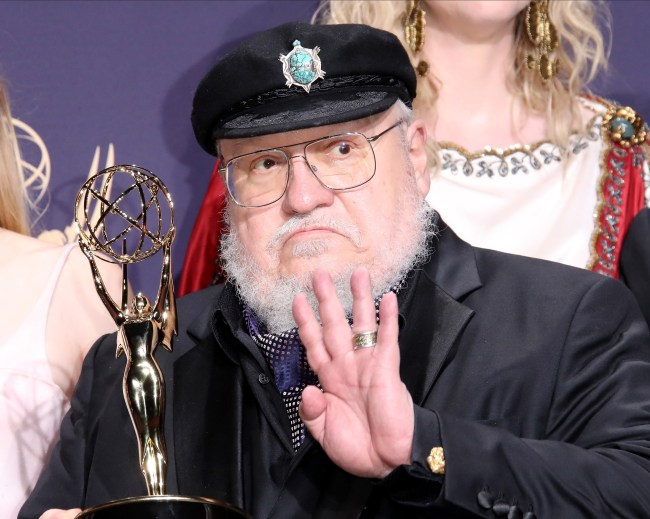 George R.R. Martin brought a lot of joy to Fantasy fans with the creation of his ‘A Song of Ice and Fire’ series which led to HBO’s Game of Thrones. He then squandered all of that joy by allowing HBO and showrunners David Benioff + D.B. Weiss to foolishly rush through the final two seasons and ruin the series entirely, leaving a poor taste in every fan’s mouth for all of eternity.

Now the author is receiving some comeuppance by his neighbors who objected to him building a seven-sided medieval castle at his compound in Santa Fe, New Mexico, according to a report from the Associated Press.

Game of Thrones” author George R.R. Martin won’t be able to build a seven-sided, castle-style library at his compound in Santa Fe that drew objections from neighbors.
The city’s Historic Districts Review Board on Tuesday denied a request to allow Martin to exceed the building height limit in the historic district where he lives, the Santa Fe New Mexican reported. The project included a roof deck and an elevator tower.

“It is a medieval castle, and I don’t understand how we could possibly approve it in this style,” board member Frank Katz said.
Mark Graham lives south of the property and said residents couldn’t “support having a castle in the neighborhood.”
“With the notoriety of Mr. Martin and ‘Game of Thrones,’ we absolutely fear that our neighborhood will become the next treasure hunt, that his fans will be looking to find the castle that’s in the middle of Santa Fe,” Graham said. (via AP)

George R.R. Martin is a native of Bayonne, New Jersey but he’s been living in Santa Fe, New Mexico for quite some time. He was married at that home back in 2011 and it’s clearly a special place for him and his family. But a medieval castle in the middle of picturesque and historic Santa Fe? That’s not going to fly.

Maaaaaybe if he’d waited until publishing The Winds of Winter before submitting his castle proposal the neighbors would’ve gone for it. He’s 71-years-old and has been working on that book since A Dance with Dragons was released back in 2011. Prior to that, he’d released a new book every 2-5ish years in the series but at this point fans have been waiting almost a decade for the next book in the ‘A Song of Ice and Fire’ series, the source material for HBO’s Game of Thrones.

It’s perfectly reasonable for his neighbors to not want to see a seven-sided medieval castle library in the middle of Santa Fe, completely out of place from everything else in sight. Martin is a wealthy man and could pursue his dreams of owning/building a castle if he wants to but it’ll have to be somewhere other than Santa Fe.