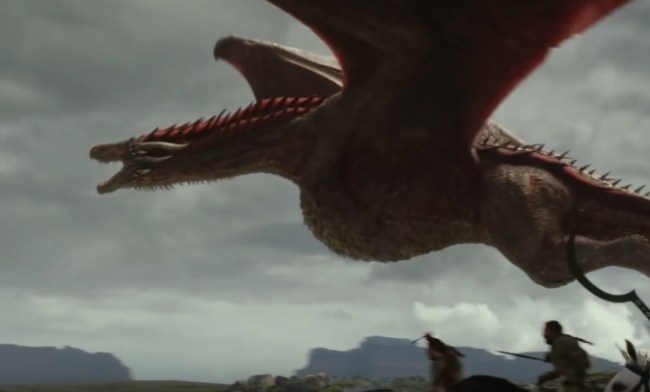 A very wise man once told me, “Every new beginning comes from some other beginning’s end.” That will be the case with Game of Thrones ending this year and the beginning of the TV prequel series based on George RR Martin’s books. We really don’t know too much about the series since it is still probably two years away from hitting TV screens, but Martin revealed some new details about the show this week in an interview with Entertainment Weekly, you know, instead of actually finishing The Winds of Winter.

“Westeros is a very different place. There’s no King’s Landing. There’s no Iron Throne. There are no Targaryens — Valyria has hardly begun to rise yet with its dragons and the great empire that it built,” Martin said. “We’re dealing with a different and older world and hopefully that will be part of the fun of the series.”

This is great news for HBO executives who don’t want the costs of episodes to spiral out of control. No dragons means less CGI needed for the show. Special effects are expensive, one estimate suggests it costs $800,000 for 10 minutes of CGI. “I just saved a bunch of money by not including dragons int he new Game of Thrones show,” an HBO exec, probably.

But that also means we won’t be able to scream “DRACARYS” at awesome flying and fire-breathing dragon scenes on the screen like these.

Not even ice dragons.

The origins of dragons from the Game of Thrones Fandom page:

“Five thousand years ago, men of the Valyrian Freehold learned how to master and ride dragons as beasts of war, and used them to forge an empire that stretched across most of the continent of Essos, dominating almost half of the Known World. Four hundred years before the War of the Five Kings, the entire Valyrian empire and almost all of its dragons were destroyed in a single day, during a cataclysmic volcanic eruption known as the Doom of Valyria. One Valyrian noble family, the Targaryens, survived the Doom on the distant island outpost of Dragonstone in the Narrow Sea – along with the last surviving Valyrian dragons.

One hundred years later, Aegon I Targaryen and his sisters used the last three surviving dragons in the world to conquer and unify the Seven Kingdoms of Westeros. For generations, the dragon-kings ruled over much of Westeros – but the dragons eventually died out after nearly a century and a half, and the species was subsequently considered to be extinct.”

Here is a video explaining the history of dragons in Westeros.

The upcoming series will star Naomi Watts of Mulholland Drive and King Kong fame. “Taking place thousands of years before the events of Game of Thrones, the series chronicles the world’s descent from the golden Age of Heroes into its darkest hour,” the synopsis of the show states. “And only one thing is for sure: from the horrifying secrets of Westeros’s history to the true origin of the White Walkers, the mysteries of the East, to the Starks of legend … it’s not the story we think we know.”

If you are feenin’ for some dragon action do not fret because his new Fire & Blood book that focuses on the Targaryens is available. Still no word on when The Winds of Winter will be out, but Martin has allegedly locked himself in a remote cabin so that he can devote all of his attention to finish the much-much-anticipated GoT book.

Here are all the dragon scenes from season 1-7 in Game of Thrones since we only have six episodes of dragons left.