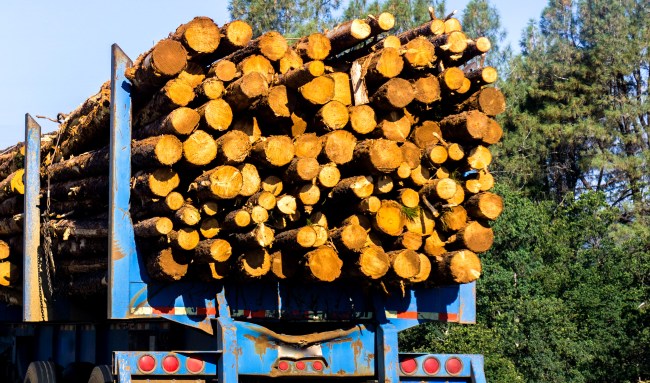 Remember that grisly scene in the movie Final Destination 2 when a policeman was following a logging truck only to have one of the logs break loose from his load and go flying through the cop’s windshield?

If not, here you go. It’s quite the scene.

Turns out that sometimes reality is even more frightening than horror movies.

Recently, a Georgia motorist was cruising down Cleveland Highway in the Cohutta area in Georgia, about 100 miles northwest of Atlanta near the Georgia-Tennessee line, when not just one, but several logs from a logging truck rammed the sh*t out of their Nissan Xterra SUV including several that ended up going straight through the windshield.

Thankfully, in this case, no one was killed as somehow the driver reportedly only suffered minor injuries, according to the Whitfield County Fire Department, who posted several photos of the insane wreckage on their Facebook page.

They show the logs went crashing through the windshield of the Xterra all the way through the back seat and into the window of the rear hatch of the SUV.

According to comments by a relative on Facebook, the driver rear-ended the logging truck when he tried to reach something on the floorboard of the SUV after spilling coffee on himself. They also reported that he underwent several hours of surgery for a shoulder injury, which considering the photos, is indeed “minor” compared to what could have happened.

Some commenters who claim to have witnessed the scene and/or know the driver speculated that the fact the driver was bent over reaching for the floor may have actually saved his life. Incredible if true.