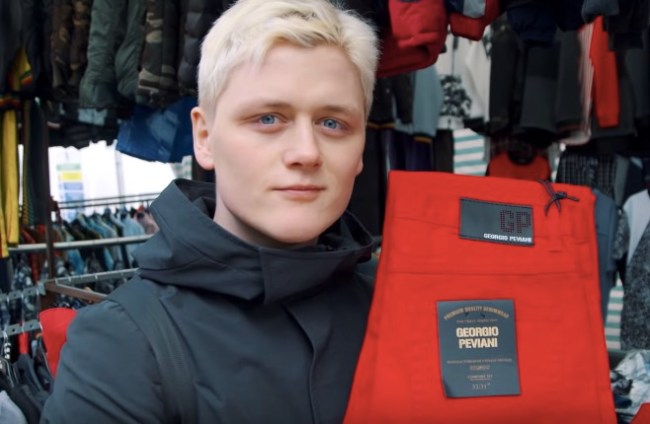 This dude named Oobh Butler snuck his way into Paris Fashion Week pretending to be someone named Georgio Peviani, a high-end jeans designer. In reality, the Georgio Peviani jeans were just some random ass pair of knock-off designer jeans this guy found in a market that he liked because the name was so drastically different than Giorgio Armani that it caught his attention.

Anyway, this dude printed up a fake business card pretending to be Georgio Peviani and snuck into the A-List event and everyone fell for his ruse hook, line, and sinker. It’s pretty amazing that someone can pull this off and actually help a knock-off brand blow up in the process:

I wish I could say that I’m familiar with the world of knock-off designer brands but I’m not. I’ve taken friends to Chinatown so that they can purchase knock-off items but I’ve never purchased anything myself. It’s not that I’m one of those people who doesn’t care about brand labels, but when it comes to these knock-off designer items I’ve just always assumed that the quality is inferior in some way.

I guess I must’ve been wrong in this assumption because Oobah Butler for VICE was able to take these Georgio Peviani knock-off designer jeans to Paris Fashion Week and he was able to work his way into elite A-List parties. He even had a buyer from Milan wanting to put his ‘Georgio Peviani’ jeans in their stores. If the fashion elite can’t even discern knock-off from quality than maybe I shouldn’t be turning up my nose at the quality of knock-off designer products.

As for why anyone would ever care enough to wear knock-off designer clothes, I can’t explain that. The desire to wear a brand being so strong that they’re willing to wear a fake version, I’ll never understand that. In fact, I’m not sure I’ll ever understand anything to do with High Fashion.