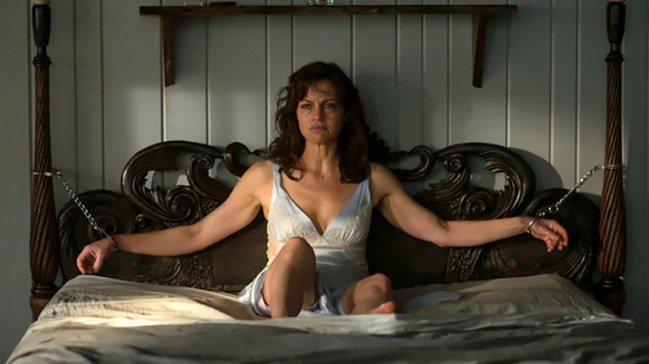 Is Stephen King literally trying to scare us to death this month? Not only does he have IT coming out this month, Netflix is also releasing another adaptation of one of his creepiest books, Gerald’s Game.

Let’s face facts though. If you are a fan of reading Stephen King’s books you know that there haven’t been very many films, TV shows or mini-series created using his stories that have been worth a flip since The Shining came out 37 years ago.

Luckily, the reviews for IT seem to be through the roof, so that’s promising…

And we know Netflix has a pretty darn good track record with their original films and shows. So hopefully Gerald’s Game will turn out to be as good as the trailer makes it look.

A little background first… Gerald’s Game stars Carla Gugino and Bruce Greenwood as a husband and wife who decide to try a little sex game where Gugino’s character, Jessie Burlingame, gets handcuffed to the bed inside a remote cabin in western Maine. Problem is, Jessie’s husband Gerald drops dead before Jessie gets the handcuffs removed. That’s when things go horrifically off the rails.

Sound creepy AF? It should. Even King himself called what he saw when he watched a rough cut of the film “horrifying.”