Gerrit Cole Gives Up Home Run After Having To Change Balls Due To Pandemic, Wasn’t Happy 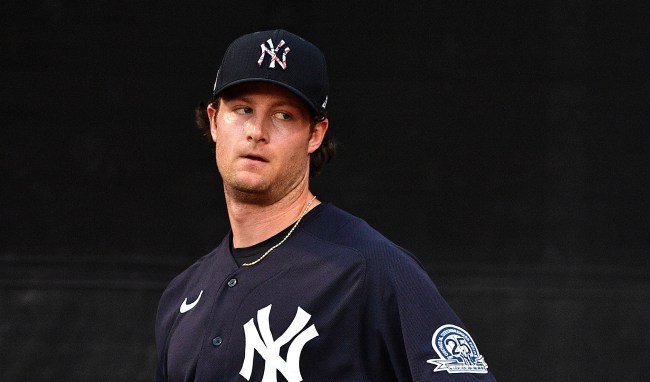 Among the many ridiculous new rules that Major League Baseball has put into place (that will be repeatedly violated) for the upcoming 60-game season in the name of safety during the pandemic, is a rule that if a pitcher strikes out a batter, and the catcher – as they always do – throws the ball around the horn, then because that baseball was touched by everyone in the infield, it gets tossed out and replaced with a new baseball.

On Tuesday, during a New York Yankees intrasquad game, the team’s new, high-dollar ace Gerrit Cole was on the mound when he struck out outfielder Mike Tauchman.

Naturally, catcher Gary Sanchez immediately fired the ball over to the third baseman and it made its typical trek around the basepath before being returned to Cole on the mound.

When the umpire signaled to Cole that he needed to then take that baseball out of play, Cole, who is rather particular about the type of baseball he likes to pitch with, was visibly agitated, telling the umpire, “I liked that ball.”

(Note for future reference, baseball fans, this occurred after the very first batter. It’s going to be a long, long 60-game season. But you already knew that.)

Pitchers are notorious for favoring certain baseballs over others whether it be due to the slickness of the ball or if the seams are wound tighter or raised higher. Depending on the pitcher’s preference for how he likes to grip the ball it can truly make a difference in their effectiveness.

Case in point, the very next batter, Miguel Andujar, took Cole deep, hitting a home run on the very first pitch of his at-bat following the ball change.

Gerrit Cole cant reuse a ball he likes due to corona, has to use a ball he doesn't like and gives up a homer , a breakdown pic.twitter.com/GR9M4b798R

Cole did end up doing okay overall, however, striking out six batters in his five innings pitched, allowing only one hit – the homer to Andujar, so he’ll be just fine.