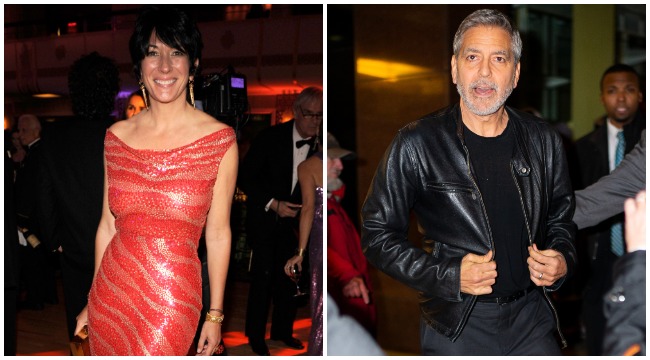 Of all the things to brag about relentlessly, giving a stranger a blowie near a toilet seat in a public establishment shouldn’t be one’s crowning achievement.

Unless that man is as famous as Geroge Clooney and the woman is as deranged as Ghislaine Maxwell.

The Epstein chum, who is currently awaiting trial on charges of enticement of minors, sex trafficking of children, and perjury, reportedly couldn’t stop gushing about performing oral sex on George Clooney at a show-business event some years ago, according to The Sun.

The claim was made by one of Epstein’s alleged victims, Virginia Giuffre, who spent two years as a traveling masseuse after being approached by Maxwell in the summer of 2000.

In her 139-page book The Billionaire Playboy’s Club, which was unsealed by a New York judge last week, Giuffre claimed Maxwell “loved to brag about her rendezvous with various lovers.”

“Once she came back giddy as a schoolgirl with an explosion of news, with all the build up and excitement in her voice you’d think she was the next crown princess,” Giuffre writes.

“But she had given George Cooney a blowj*b in the bathroom at some random event.

“She never let that one down.”

Clooney must be beside himself upon hearing this news. What once was your everyday, forgotten public bathroom beamer has devolved into an international headline involving you and one of the most infamous alleged pedophile peddlers in recent history. Can’t imagine his wife feels any better. Happy Friday, bro.

As for Maxwell, her trial is due to begin in July 2021, and she faces 35 years in prison if convicted.