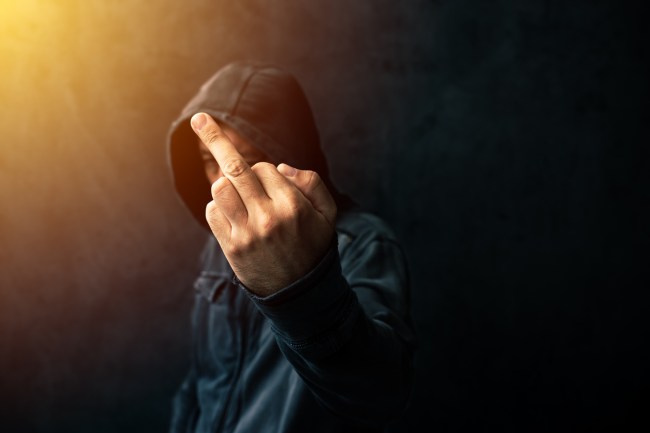 There are plenty of reasons I look forward to heading home for the holidays but there aren’t many things that make me more excited than getting a chance to catch up on all of the juicy local drama I’ve missed since my last visit.

Say what you will about the crackerjack reporting you can find inside the pages of The New York Times but I’d rather grab a local newspaper and read letters to the editor penned by people who are irrationally angry about the zoning laws in a small New England town— some of whom make the citizens of Pawnee seem sane and rational by comparison.

Of course, there’s one character on Parks and Recreation who’s mastered the art of sticking it to the man: Ron Swanson, whose idea of small government is one that doesn’t exist in the first place.

The show’s resident libertarian is also a master woodworker and it would appear he has a kindred spirit in Vermont after a giant wooden sculpture of a middle finger unexpectedly popped up in the small town of Westford earlier this week.

I found the most incredible news story of the year guys…

A man in Vermont built a massive $4,000 sculpture of a middle finger pointed directly at his town's government.https://t.co/zxJVD7Yfqp pic.twitter.com/rVNTcBaQOd

A man in Vermont built a $4,000 massive sculpture of a middle finger and pointed it right at his local government.

According to WCAX, residents were baffled when this amazing piece of art appeared seemingly overnight. It wasn’t initially clear who was responsible for the installation (or who exactly the bird was being flipped at) but at least one person respected the hell out of whoever was petty enough to make it in the first place:

“You can’t believe somebody went through all that work. It’s very big. Everybody got the message. But a lot of work went into it,” said Carol Jordan of Fairfax.

After a bit of digging, a reporter tracked down a man named Ted Pelkey, who said he dropped $4,000 to send a message to members of the town board he alleges are preventing him from building on a property he’s attempting to use as a new base for the businesses he runs.

He claims the local government has a grudge against him and elaborated on his claim with one of the spiciest takes I’ve seen in a while, saying:

“In my eyes, if somebody tells you they hate you right up front it’s a hate crime.”

I can’t think of a better way to get on their good side.