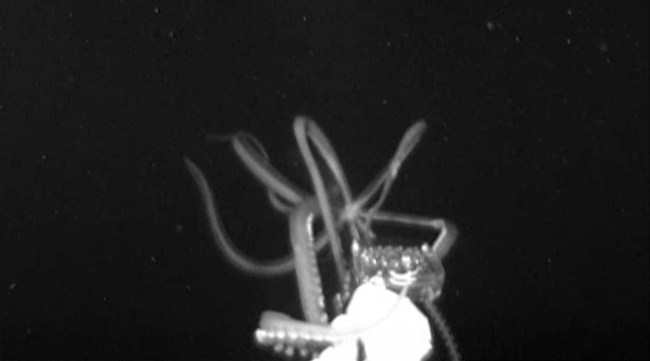 There’s probably no animal on today’s planet that has been featured in books and movies, yet so rarely seen in real life, then the giant squid. In fact, there had only been two times when the elusive deep-sea creature was captured on camera. Last week, the giant squid was caught on video for only the third time ever.

Researchers from the National Oceanic and Atmospheric Administration (NOAA) were on a 15-day expedition in the Gulf of Mexico, when they were able to catch a glimpse of the rare sea monster. The expedition was titled “Journey Into Midnight: Light and Life Below the Twilight Zone” and was funded by the National Oceanic and Atmospheric Administration’s Office of Ocean Exploration and Research.

The NOAA ship was about 100 miles southeast of New Orleans, Louisiana, where the team of scientists were exploring some of the deepest parts of the Gulf of Mexico.

The researchers used a stealth camera system called the “Medusa” to explore the dark depths of the sea. The Medusa is said to be an “unobtrusive” submersible device that uses red lights that aren’t visible to animals that live in the deep ocean and has thrusters that don’t produce noise.

The Medusa is equipped with an “e-jelly,” which baits predators by mimicking the appearance, bioluminescence and movement of a deep-sea Atolla wyvillei jellyfish. The Medusa reached a depth of 2,460 feet in their recent mission.

On Medusa’s fifth deployment into the area, the electronic jellyfish caught the eye of a giant squid on June 19. The giant squid extended its lengthy tentacles to snatch the bait. Once the giant squid realized that the e-jelly was not food, the huge animal quickly swam away into the darkness.

Big…or maybe we should say "giant" news! A few days ago, we posted about how Journey into Midnight expedition team was hunting for giant squid in Gulf of Mexico. Well, they found one… Take a break from #Okeanos live video for the full story: https://t.co/HAdRebectL pic.twitter.com/6cNVH2b0IM

Researchers believe the giant squid was a juvenile and was up to 12 feet long, but the beautiful encounter was so quick that it was difficult to estimate the exact size. Giant squids can grow up to 43 feet in length. That’s a lot of calamari.

“I started to see a tentacle and I got more and more excited and then when the tentacles pulled back there aren’t words to describe it,” Dr. Nathan Robinson told CNN of the epic 25-second video.

Robinson, who is a director at the Cape Eleuthera Institute in the Bahamas, witnessed the Architeuthis in the 20th hour of 120 total hours of footage from Medusa and was in shock. “My heart felt like exploding,” Robinson said. This was the first time ever that a giant squid was seen in the United States.

“People started crowding around, shouting, getting pretty excited, but trying not to get too excited because we had to be sure it really was what we thought it was,” said Dr. Edie Widder, who is the CEO of the nonprofit Ocean Research and Conservation Association (ORCA). “We all proceeded to go slightly nuts,” Widder said.

Researchers had a scary moment right after viewing the video. Lightning struck the NOAA ship about 30 minutes after seeing the giant squid sighting and many on board thought the computer on the boat may have been fried. Thankfully, the equipment and the video were not harmed.

“We did not find a monster,” researchers said about the video. “The giant squid is large and certainly unusual from our human perspective, but if the video shows anything of the animal’s character, it shows an animal surprised by its mistake, backing off after striking at something that at first must have seemed appealing but was obviously not food.”

The third video of the rare giant squid happened in 2015, when one surfaced in Japan’s Toyama Bay.

“We know so little about how these animals survive in the depths… this helps us learn something more about how they hunt and their energy budget, but we need to know a lot more,” Widder said.

You can watch underwater nature footage from the NOAA Ship Okeanos Explorer during its ocean exploration expedition below.

RELATED: Vlogger Tries To Eat Live Octopus In Livestream But Gets Her Face Eaten Instead