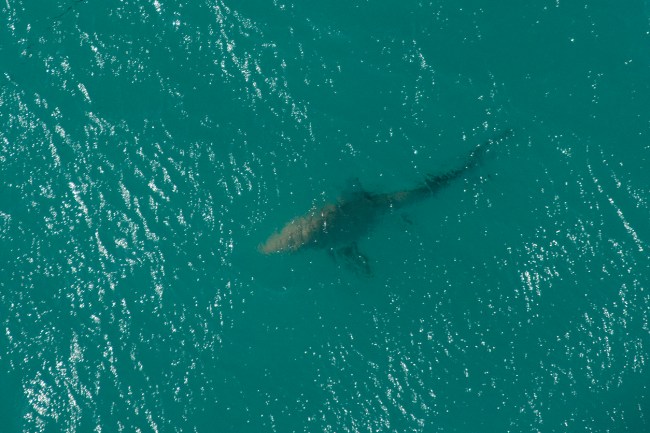 A Facebook post with photos of sharks near unaware swimmers has gone viral. A tourist was visiting Myrtle Beach, South Carolina snapped a photo of oblivious swimmers who had no idea that sharks were near them.

Ginger Gilmer was overlooking the Atlantic Ocean as she peered down upon the Myrtle Beach shore from her 15th-floor balcony at her hotel this week. From that height, she had an aerial view that exposed several sharks in the murky South Carolina waters.

Gilmer uploaded photos of the sharks and the unsuspecting swimmers onto Facebook, which has recently gone viral. “Why I go to the beach to get in the pool! SHARKS!!!! Not one person had an idea of what was lurking around them. Can’t see the bottom, not swimming in it! #doodoodoodoo,” Gilmer wrote on Facebook.

It was only a month ago, that a 2,137-pound great white shark was pinged off the coast of the Carolinas. The 15-foot great white shark named Luna was located “over the Charleston Bump while 12’ 9” white shark Caroline is much closer to shore off Edisto Beach.” Photos of the huge sharks were shared by OCEARCH, a non-profit organization that studies and tracks sharks, on their Facebook page.

A cluster of massive great white sharks gathered approximately 20 miles off the coast of the Carolinas. The sharks will continue up the coast and travel as far north as Newfoundland.