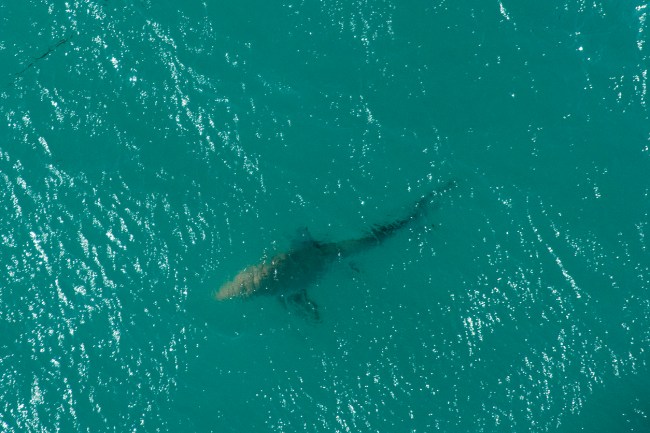 In what looks like a scene from Jaws, a swimmer found out she was only feet away from a large shark after crowds of people screamed to warn the woman her proximity to the potentially dangerous animal.

At one point, the swimmer was swimming right next to the shark and the woman had no idea. The shark passed the woman, but then circled back around. Halfway through the video, onlookers on the beach notice the shark and try to warn the woman by screaming, “SHARK!”

The woman finally realizes that she is having a close encounter with a shark and races back to the shore. The shark seemed much more curious than ready to snack on the woman. The video has gone viral and been viewed millions of times on social media posts on Facebook, Twitter and YouTube.

There was another two shark sightings in the Gulf of Mexico last week. There was a hammerhead shark floundering on the shores of Panama City Beach. The distressed shark did not survive. And another sighting at Anna Marie Island near Tampa, Florida. A hammerhead shark, which are generally harmless to humans, was seen circling a boat.

SHARK CIRCLES BOAT! A Florida woman was about to take a swim near Anna Marie Island when she spotted this hammerhead shark circling her boat. 😲🦈 MORE: https://t.co/Ayn91esRWJ pic.twitter.com/Bv4v4KsyNZ

In April, a 16-foot-long great white shark circled a boat off Summerland Key in the Lower Keys. Then the mighty beast started to chomp on the net of chum on the side of the boat. That encounter was followed by another shark sighting only a few days later.

Wow! Watch a great white shark take a bite out of a fisherman's chum bag in the Florida Keys. https://t.co/cmy6pm0C8R pic.twitter.com/UoHOmnqt5j

Another great white shark sighting was reported near Key West by boaters, one day after a shark was also spotted in the Lower Florida Keys. https://t.co/WGOJETzjNz pic.twitter.com/QQTDPmbNkR

The Orlando Sentinel posted a map of recent shark sightings in Florida that was created by OCEARCH, a nonprofit group that tags and tracks sharks.

Sharks popping up all around Florida for summer beach season https://t.co/z6XK47ZyUy pic.twitter.com/35NK87Pqtp

RELATED: Photo Of Monster Great White Shark That Died With A Huge Sea Turtle In Its Mouth Goes Viral

This isn’t the first time oblivious swimmers were feet away from sharks. Drone footage caught a huge shark near the shore of Miami in 2017. In 2018 there was a small boy swimming very close to several sharks in the Bahamas. Then there was a shark chasing after a swimmer off Bondi Beach in Australia.