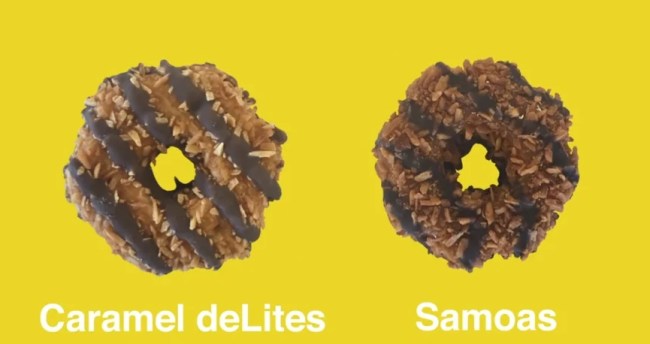 It’s that time of the year when you get your 17 boxes of Girl Scout cookies and attempt to not devour them all in one binge session of Netflix. However, did you know that your Girl Scout cookies that your Aunt Joanne in Slickpoo, Idaho eats might be a different name and made by a different bakery company than your former college roommate Gary who lives in Knockemstiff, Ohio? This is the hard-to-believe truth that many are trying to rationalize and leaving everyone across the country shook.

In 2017, more than 1 million Girl Scouts sold approximately 200 million boxes of cookies, equating to about $800 million in sales. The Los Angeles Times alerted the world that the Girl Scouts have two huge bakery companies pumping out all of those cookies — ABC Bakers and Little Brownie Bakers.

But it isn’t just names that are different. Some cookies have different ingredients and different nutritional values. Beloved Thin Mints from ABC Bakers have a different flavor than Little Brownie Bakers. The Girl Scout S’mores cookies are completely different cookies depending on where you live. S’mores from ABC Bakers are “more chocolate; faint vanilla/marshmallow layer; larger graham cracker,” whereas the S’mores from Little Brownie Bakers are “sandwich-style with frosting and fudge; hints of maple.” Everything is a lie.

Buying Girl Scout Cookies this season? Not sure what the heck Do-Si-Dos & Tagalongs are? Here’s how to choose who to buy from based on the two different cookie bakers (I much prefer Little Brownie Bakers): https://t.co/DxUan2qj3u pic.twitter.com/asQF2nAmW0