My Terrible, Horrible, No Good Round Of Golf With An 85-Year-Old Man 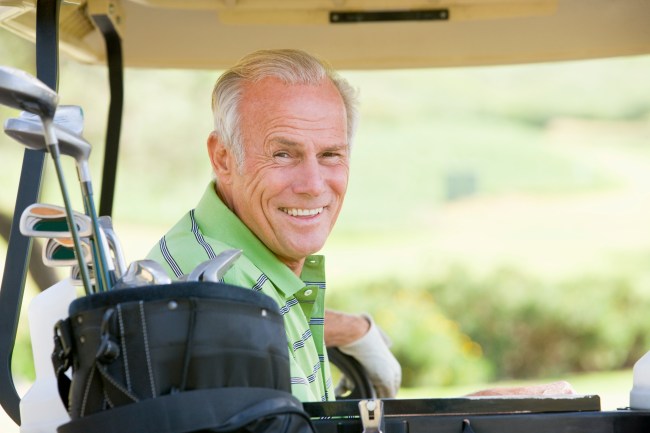 Golf is slow. I like to play fast, like that cooking show Chopped. If I’m stuck behind a slow group, I’ll start coughing to make sure they know I’m there. If they don’t let me through because they’re heartless troglodytes, I skip a hole and cut in front of them. It can get tense. One time, I cut past one of Maine’s more prominent personal injury attorneys. I suppose seeing one’s face on a billboard, scowling over some phone number that spells something like 1-800-neck-brace, gives a man a sense of godliness. Either way, he complained to the head pro. The head pro spoke to me. Instead of listening, I thought about this trampoline we used to have. So dangerous. Can’t believe I didn’t hurt myself more often. Sometimes, we’d push it to the foot of the basketball hoop. Never had the balls to try a front-flip dunk. Sure made me admire those guys who perform at the halftimes of NBA games. Doubt they make much though.

To avoid this trouble, I try to play early in the morning before the first group and whip around as quickly as possible. I never warm up. The driving range is for people who subscribe to Golf Magazine. This might explain why my handicap fluctuates more than Chandler’s weight on Friends. A snapshot of recent scores:

In normal times, I try for nine holes in an hour or 18 in under two hours. It’s a trot. I carry my bag and make sure to place it on the side of the green such that once I’ve putted out, my bag is in line with the next tee. Efficiency, baby. No extra steps. The shortest distance between two points is a straight line.

The driver behind this hustle is my relationship. I won’t invoke some “the old ball and chain wants me home” bullshit; I want to be home. I feel guilty if I take four hours to play a round of golf. That’s such an enormous chunk of the day. My girlfriend doesn’t have many, if any, activities that require four hours. At best, a haircut or a workout or a drink with a friend takes her two hours. If I’m extremely lucky, she might schedule them back-to-back. Either way, in most cases, she’s at home before me unless I play golf at my speed. And knowing she’s at home while I’m reading a putt from the backside of the hole makes me feel like a dick. So instead, I take a quick glance, miss the putt, and don’t improve at this game into which I sink so much money, so much time. Love: my anti-game-improvement.

Since COVID, my golf course has levied stricter rules to regulate play—you must have a tee time, no walk-ons, etc. The tee sheet has been slammed with four-balls from the first slot until dusk, every day, since the course opened in April. My usual workaround of hopping out before the first group doesn’t fly anymore, so my best bet is to play nine holes after work and try to get home to help cook dinner. The problem is, I’m forced to join up with other people. Even if I put my name down first, other people join me. The course is jammed ahead of me anyway, so it doesn’t make much difference.

Unless you’re joined by an octogenarian.

Enter John, with a last name that evoked gas lamps, polio as a real threat, and democracy before female participation. He was cute as a button and spoke in a husky, gentle whisper, as though the decades had worn away his capacity for anger and what was left was only peace. He laughed when he learned I’m a comedian and said “isn’t that something.” He drove a cart by himself. And his bad shots made him giggle and sigh but did not shake his faith in the day.

Now that you know him, you’ll hate me from here. Because I did not have a good time with John. We had one other player in our group—a young lady who was a superb golfer and played fast too. On the first green, we learned what we were in for as John studied his putt like a menu with lots of disclaimers (consuming raw seafood may cause heart to explode… crust may contain nuts… a gratuity of 20% will be applied to parties of six or more…). And of course, his putt wasn’t even close. In his defense, putting becomes exceedingly difficult once your spine turns to powdered baby formula. His second putt missed, and he was left with a four-incher for quintuple bogey. Generously, I said “that’s good, John,” to which he croaked back “gotta make ’em all. I’m in the twilight league.”

The twilight league? The twilight of horseback warfare? I appreciate the integrity John, but I promise we’re not going to report you for taking a gimme. What’s more, once he made the putt, the sound his back bones made while he bent down to fish his ball from the hole will haunt my eardrums for moons to come. I’d never heard a body mimic the sounds of settling of ice upon a frozen pond. I offered to get his ball from the hole for him going forward but he politely turned me down, citing social distancing. Fair enough, John. I guess you don’t survive the Spanish Flu and forget its lessons.

His drives were always fine, albeit short. The clubs were simply too heavy. He drew his driver back in two distinct motions—first to his elbow, then a hinge, then to his neck, hoping that gravity would do the rest. It was really around the greens that John seemed to forget that time continues. He’d mark his ball, lick his thumb, and rub it clean. He’d ask “who’s away?” so often that we had no choice but to abide by that ordering. And he finished every… single… putt.

I had planned and hoped to play 12 holes in two hours. By the 3rd hole, I was divorced of that fantasy. By the 6th hole, I was downloading meditation apps. And by the time I got back to my car, having completed nine holes of golf in 2.5 hours, I had resolved to add a clause to my will granting plug-pulling power to my loved ones should I ever play golf so slowly.

If grocery stores are offering separate time windows for elderly people to shop, golf courses should absolutely set aside a couple mornings per week for the ancient to play at their pace. Like an extreme version of adult swim at the local pool, we need to give them their time so that we may have ours.