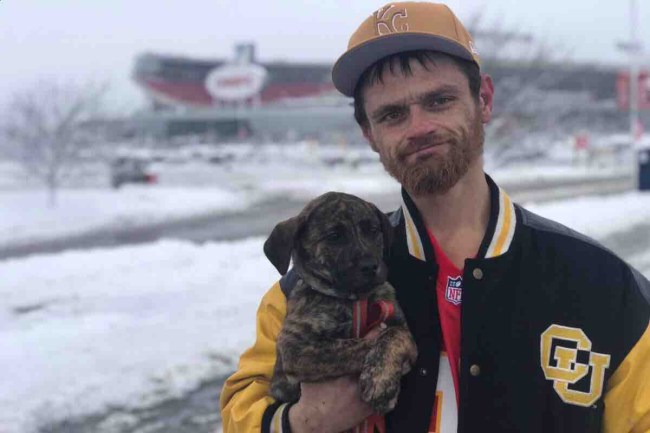 This week, we brought you the story a good Samaritan named Dave Cochran voluntarily helping Chiefs offensive lineman Jeff Allen dig his car out of the snow so that he could make it to his playoff game over the Colts at Arrowhead on Sunday.

Cochran, who is homeless and lives in his Chevy Suburban with his girlfriend, saw a couple cars stuck as he and his girlfriend were driving on (U.S.) 40 highway and told his old lady, ‘We have to help them.’ Cochran said he saw Allen had Texas plates and figured he wasn’t used to the Kansas City coldness and wasn’t nuanced in snow-related issues.

After the win, Jeff Allen succeeded in finding the good Samaritan on social media to give him tickets to the AFC Championship game Sunday against the Patriots. Suffice it to say, Cochran was super appreciated.

“It’s like a dream come true,” Cochran explained. “I saw the message this morning, and I am not going to fake with you, call me soft if you want to homeboys, I started bawling to know he is a man of his word and he reached out to contact me.”

Allen wasn’t the only one who wanted to help Cochran, that’s why a GoFundMe was set up to help the man get back on his feet. The fundraising goal was $10,000. In just two days, the campaign has already raised over $15,300 with over 570 donators. Not only that, but a dental group wants to offer free work and a a veterinarian’s office wants to care for the little dog that was in Cochran’s arms.

The GoFundMe summary is as follows:

Dave is a homeless Good Samaritan who on a very cold and snowy day helped out one of Kansas City’s treasured heroes Kansas City Chiefs Guard Jeff Allen get unstuck from the side of the road in the snow. Dave had no idea who he was providing assistance to and with only love in his heart saw a human being in need of help. Jeff Allen has pledged to send this very deserving man to next weeks AFC Championship game hosted at Arrowhead Stadium, but I would like to be able to present this man with two life changing experiences. Can you help?

It looks like Dave will have a little extra beer money to bring to the game Sunday. $15,000 should buy him like 4 stadium beers.