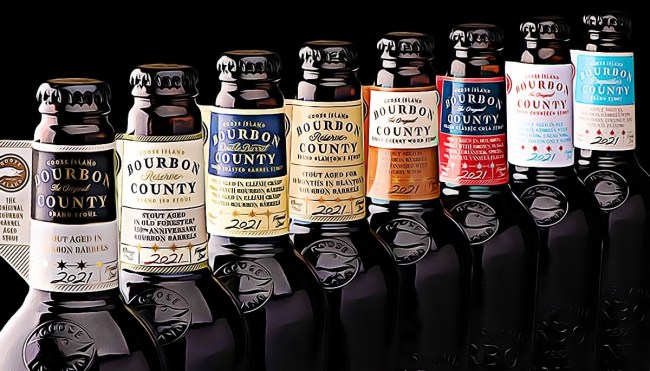 In the 1980s, America’s beer scene (if you can even call it that) was dominated by brewers who made beer that tasted like…well, beer. A country that had been home to hundreds of breweries just decades before saw that number hovering in the high double-digits, but a movement was growing that would soon change the face of the drinking landscape.

As Sam Adams founder Jim Koch recalled when I recently chatted with him, the “craft beer” label was initially coined in the mid-1980s to describe the liquids being concocted by the small, independent brewers across the United States who were slowly but surely challenging the idea of what beer could be.

That group featured a number of up-and-comers who were pouring their wares in brewpubs that had begun to pop-up—including Goose Island, which first opened its doors in Chicago in 1988. In the mid-1990s, the tiny operation made waves when it harnessed some Jim Beam barrels to age what was dubbed “Bourbon County Stout,” which would soon become one of the most sought-after beers in the country.

When Goose Island first entered Bourbon County Stout at the Great American Beer Festival, the beer was disqualified—not because there was anything wrong with it, but because judges had yet to develop a category for beers aged in bourbon barrels. By the time the event opened to the public, the other brewers who’d flocked to Goose Island’s booth out of curiosity had consumed every single drop, and just like that, a legendary beer was born.

More than 25 years after it was poured for the first time, Goose Island’s annual Bourbon County Stout release remains one of the more exciting days on the beer calendar. This year, I was lucky enough to get a sneak peek at the 2021 lineup during a tasting with a number of the brewers instrumental in concocting the eight varieties that made their grand debut on Black Friday.

As expected, Goose Island knocked this year’s release out of the park. It’s hard to go wrong with any of the bottles that recently hit shelves, but if you’re curious about which ones are worth tracking down more than others, you’ve come to the right place. 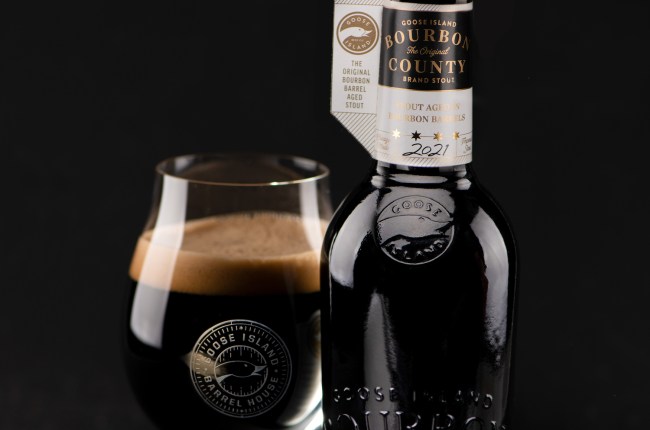 Before we dive in, I should clarify I’m not ranking these in any particular order, and there’s no better way to kick things off than with the Bourbon County Stout that started it all.

Over the years, Goose Island has run into a few issues stemming from contamination concerning various batches of BCS (I was briefly soured on the brand when I picked up one of those bottles a while back only for it to become the most expensive drain pour of my beer drinking career). Thankfully, the brewery has made strides to minimize those mishaps, and I was all the way back on board after getting my first sip of the flagship in this year’s release.

In this case, the signature bourbon essence is derived from a mixture of barrels sourced from the heavy-hitters at Heaven Hill, Wild Turkey, and Buffalo Trace. The base imperial stout was rested in those casks for at least eight months (some aged for as long as 14), and the end result is bursting with chocolate and vanilla with some hints of sweet caramel and berry at the end. 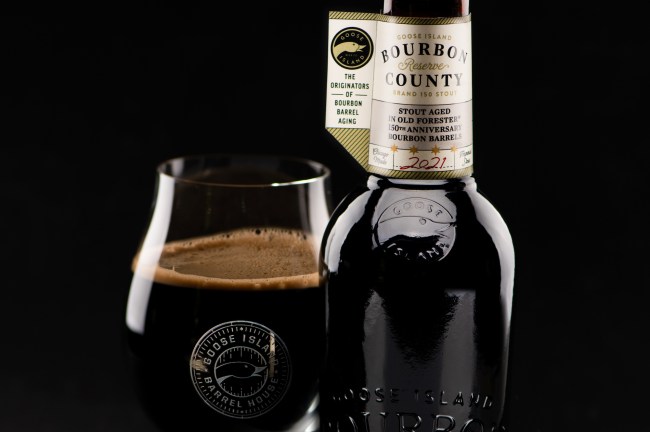 The folks who oversee the barrel program at Goose Island have been able to leverage their status as OGs in the stout-aging game to establish relationships with a number of notable whiskey producers who are more than happy to send some of the best used casks in their collection their way.

That includes Old Forester, which celebrated its 150th anniversary in 2020 with a limited run of three varieties of batch-strength bottles sourced from 150 barrels devoted to the project.

A good chunk of those barrels eventually made their way to the Goose Island storehouse in Chicago and helped create an oaky-heavy stout clocking in at 15.6% ABV, where the aforementioned chocolate and vanilla are joined by coconut at the forefront in addition to notes of molasses and almond. 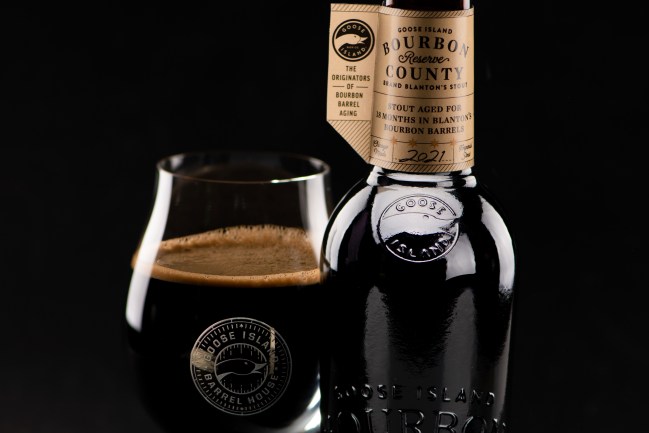 If you keep your finger on the pulse of the whiskey world, then I don’t have to tell you this variety was predestined to be the whale of the 2021 Bourbon County Stout lineup.

Blanton’s is the brainchild of whiskey legend Elmer T. Lee and was first produced at the Buffalo Trace distillery in Frankfort, Kentucky in 1984. It holds the proud distinction of being the first widely-available single-barrel bourbon on the market, and while you could easily snag one of the uniquely-shaped bottles with the signature horse topper for less than $50 in the early 2010s, a huge spike in demand has sadly led to a huge spike in the price (especially on the secondary market).

As a result, you might have some trouble tracking this one down, but if you can get your hands on one, you’re in for a treat. This BCS variant is the product of an 18-month aging process that imparts the stout with a deep chocolate flavor and a mixture of baking spices—especially nutmeg and cinnamon. 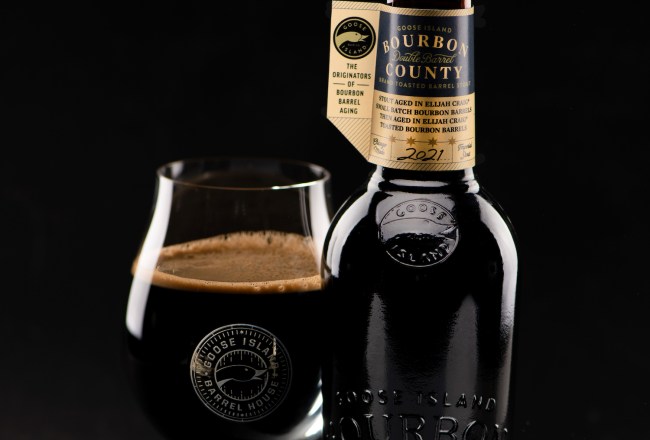 This particular beer was two years in the making: it spent the first aging in Elijah Craig Small Batch Bourbon barrels before being transferred for another in the distillery’s toasted casks. This process produces what is arguably the most complex of any of this year’s beers, as all of the signature Bourbon County Stout flavors are noticeably amplified and accompanied by a ton of oak and the essence of toasted marshmallow. 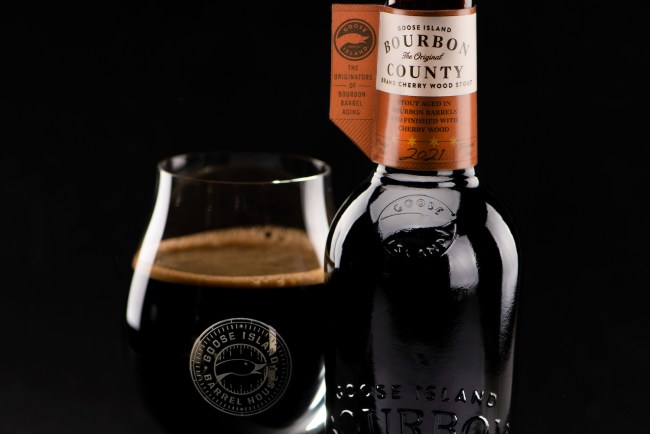 This is the most experimental bottle in the 2021 Bourbon County lineup, as the brewers at Goose Island decided to step outside of the box a bit by experimenting with a variety of different woods to see if any particular ones would impart a compelling flavor.

In the end, cherry wood was deemed the winner for this inaugural project. A select number of barrels that would’ve been destined to end up in the standard BCS were filled with staves cut into a honeycomb pattern to maximize the surface area exposed. As you’d expect, you’re going to get a bit of cherry and an overall fruitiness that takes the flagship stout to the next level.

The Goose Island team teased similar trials with other woods could be conducted in the future, and this is certainly a very promising start. 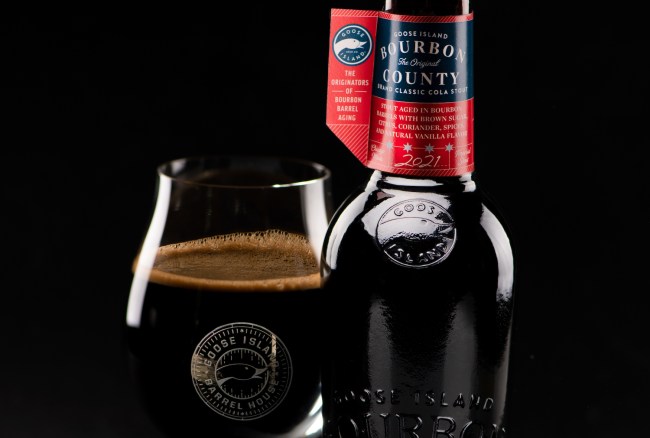 During the tasting, I learned that Goose Island conducts an annual contest for employees across departments who are invited to take home some samples of the base imperial stout to tinker with to create their own twist, with the standout earning the honor to hit the market after a company-wide vote.

Ahead of this year’s drop, brewers Paul Cade and Jason Krakowski teamed up to whip up a tribute to an old-fashioned cola and did so by infusing the beer with a laundry list of ingredients including coriander, brown sugar, cassia bark, nutmeg, vanilla, and juice and zest from oranges and limes.

It’s safe to say they succeeded in their quest, as this BCS varietal lives up to the promise of delivering cola flavor while avoiding a sickly sweetness—with the added benefit of a 14.1% ABV. 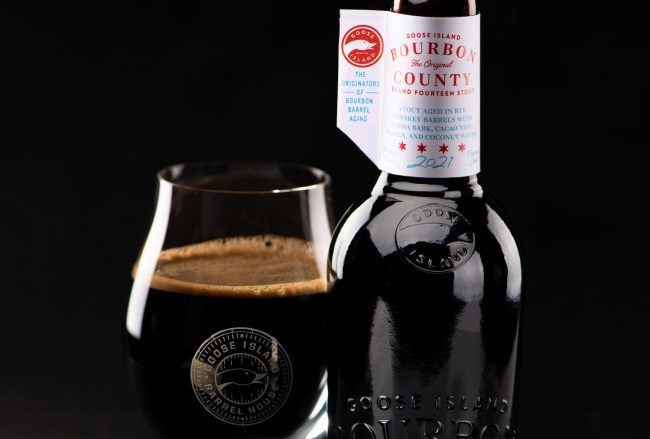 Each year, Goose Island reserves a couple of releases for the good people of Chicago that are only distributed in the city the brewery has long called home.

While these bottles are normally a one-off production, this one is the spiritual successor to a fan favorite that dropped in 2014, which was made with coconut water and infused with cassia chips, cocoa nibs, and panela sugar.

The key difference is the addition of the rye that was added into the initial mash this year, which imparts it with the pleasant spiciness you’d expect. 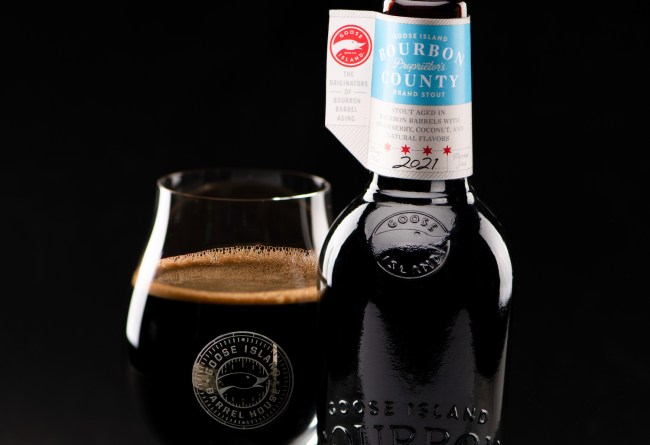 I know I said I wasn’t ranking these in any order, but I’ve saved the best for last; the most recent Proprietor’s Bourbon County Stout is not just the best beer in the 2021 BCS lineup, but one of the best beers I’ve ever tasted.

I cannot give enough credit to Goose Island brewer Emily Kosmal for dreaming up a beer that is essentially a Good Humor Strawberry Shortcake ice cream bar in a bottle. The combination of strawberry, vanilla, and coconut that were harnessed during the brewing process result in a stout that words can’t really do justice; it’s just an incredibly delightful beer and I had to stop myself from downing the entire thing at the tail-end of a tasting where I’d already put a solid dent in seven other bottles of double-digit stouts.

Sadly, this bottle was only released in Chicago, but I’d almost encourage you to take a trip there just to get your hands on some. It is really that good.