Gordon Ramsay Tells His Kids To ‘F*** Off’ If They Ask For A Job, Has No Time For The ‘Snowflake Generation’ 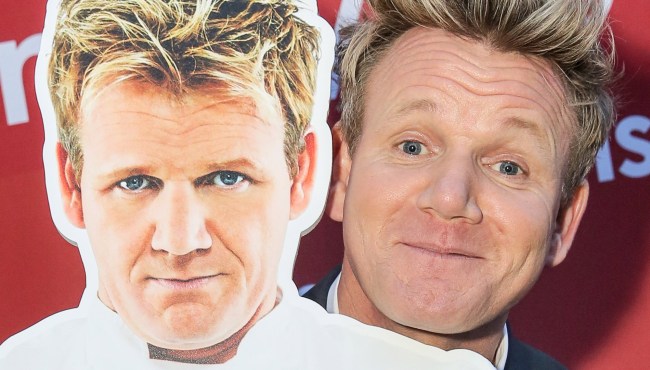 Legendary British chef and restaurateur Gordon Ramsay is many things, but shy is not one of them. And no one, apparently, knows this better than his four children.

The 52-year-old Ramsey, who is currently expecting a fifth child with his wife Tana, has four kids ranging in age from 17 to 21. Which means that they are all closing in on adulthood and will be soon looking to make a career for themselves.

They just can’t ask their dad, Gordon, to give them a job in one of his restaurants.

During a recent radio appearance, reported on by The Daily Mail, Ramsey explained his attitude towards hiring his own children, “You want to work in this business? You f*** off to another chef, learn something different and come back with something new to improve the business.”

As for why he feels that way, he does make some sense, saying, “I don’t want the staff thinking: ‘F*** it’s Ramsay’s kid, we can’t tell them off.'”

“I’m firm, I’m fair and I will give you everything I’ve got to get you to the very top. And that’s it, no bullsh*t,” he continued. “I take a lot of flak for being straight and honest but I’m not worried about that f***ing snowflake generation.”

Can I get an amen?

I can only imagine what it must be like having Gordon Ramsey for a dad. It probably goes a little bit like this…

Heck, Ramsey, who is reportedly worth $190 million, doesn’t even let his kids fly in first class with him and his wife when they travel. He sticks them in economy with the rest of us peasants.

“They don’t sit with us in first class,” Ramsay told the Telegraph in 2017. “They haven’t worked anywhere near hard enough to afford that. At that age, at that size, you’re telling me they need to sit in first class? No, they do not. We’re really strict on that.

“I turn left with Tana and they turn right and I say to the chief stewardess, ‘Make sure those little f***ers don’t come anywhere near us, I want to sleep on this plane.’ I worked my f***ing arse off to sit that close to the pilot and you appreciate it more when you’ve grafted for it.”

And if you think his kids will just ride it out and coast until the old man to croaks so they can inherit all his dough, think again.

“It’s definitely not going to them, and that’s not in a mean way; it’s to not spoil them,” Ramsay added in the same interview. “The only thing I’ve agreed with [wife] Tana is they get a 25 percent deposit on a flat, but not the whole flat.”

Ramsey said back then that he has taught his kids how to cook, but not so they can dot it as a career, and that he never takes them to fine-dining restaurants, not even the ones he owns.

“I’ve never been really turned on about the money,” he said. “That’s not my number one objective, and that’s reflected in the way the kids are brought up.”