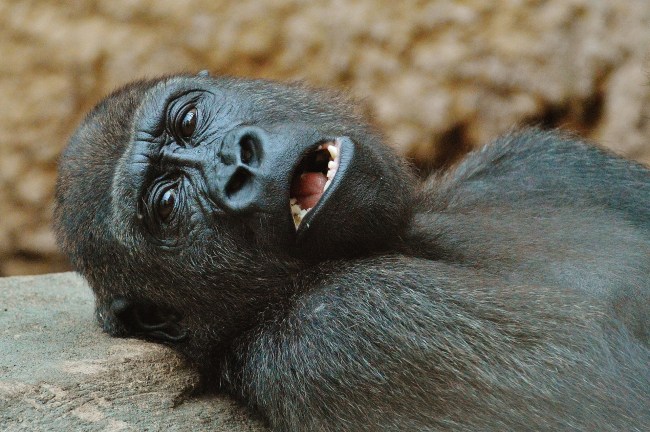 A veteran 46-year-old zookeeper in Madrid is in ‘serious condition’ after being attacked by a 440-pound gorilla at the Madrid Zoo Aquarium over the weekend. The zookeeper was ambushed in an area that’s usually safe and secure and they suffered some pretty brutal injuries.

Of all the grizzly animal attacks I can think of, being attacked by a savage gorilla and beaten mercilessly is near the absolute top. I’d put it up there with being impaled by a wild boar, attacked by a polar bear, or having my skin licked off by a leopard in Africa. A shark attack is waaaaay behind all of these animal attacks for me.

Other zookeepers rushed to the victim’s aid and were able to separate the two before any loss of life, so we should at least be thankful that we didn’t have another tragic Harambe situation on our hands (never forget).

The woman, 46, was performing routine daily tasks at around 10.15 am local time on Sunday morning in an area of the animal’s enclosure that is protected by a triple door system when she found herself face to face with Malabo, the zoo’s 29-year-old male gorilla.
“The zoo team managed to keep the animal away and later a veterinary team anesthetised it with a tranquillizer dart. The animal was brought to its interior enclosure where it was calmed down,” the zoo said in a statement.
“The reasons why the animal was able to access the area are being investigated internally, however, the judicial investigation will determine the exact details,” it added.
According to reports, the animal was “startled” just before eating his breakfast and then pounced on the keeper.
“It shook her but without using the enormous strength which it is capable of owing to its 200kg weight,” a spokesperson for the zoo said.
The keeper, who has worked at the zoo for 19 years, was intubated and hospitalised in a serious condition, emergency services said. (via Euronews)

Her injuries include two broken arms, a head injury, trauma to her chest, and the broken arms included multiple fractures AND multiple open fractures. If you’re curious what the difference between those two is I invite you to do a Google search but be prepared for some jarring results. Here’s the scene as the zookeper was taken for treatment:

The gorilla named Malabo is described as usually being ‘close to caregivers’ and has been raised at that zoo since birth so this was a very out-of-character incident for this particular gorilla but it sounds like both the gorilla and zookeeper were frightfully startled when they both thought they were alone in that area.

Have you ever really seen a gorilla up close through the glass and realized that they could end you in an instant if that glass wasn’t there? If not, take a trip to the Bronx Zoo where you can get up close to the gorillas.

Do gorillas feel remorse and guilt after an attack on a loved one? I get that I’m anthropomorphizing here and it’s not fair to attribute ‘human emotions’ to an animal but I’m curious if similar behavior has been documented in gorillas.

For more on this developing story, you can visit Euronews.