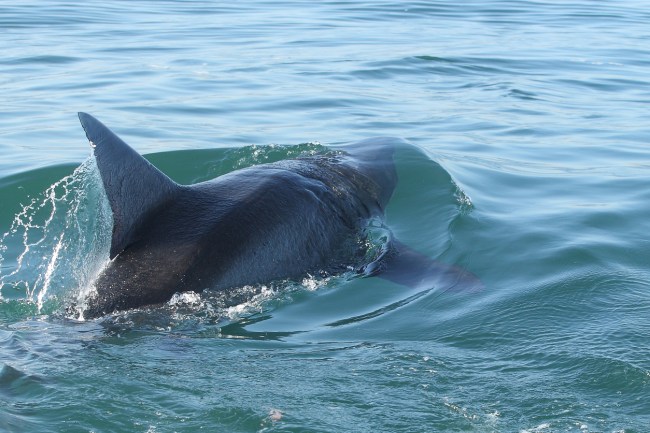 A viral photo captured a massive great white shark seen with huge bite marks on its body near its dorsal fin. There is debate as to how the vicious, jagged wounds were done to the shark.

A gigantic shark was spotted with circular teeth marks on its back by photographer Jalil Najafov. The shark – estimated to be a 15-foot-long female shark – was photographed in early December in Isla Guadalupe, Mexico. Najafov, 40, took the incredible photo while diving in the waters off Mexico.

“I was really surprised as I have never seen anything like this in my life,” Najafov remarked. “This bite mark was so huge on a big shark, and I was like, is that real?”

“On rare occasions, during mating season among sharks, ‘mating scars’ appear on female sharks’ bodies caused by the males holding onto them,” Najafov said, according to CBS News. “These scars are mostly deeper cuts and punctures, indicating a more forceful motivation such as coercive mating from the male’s side.”

Najafov documented other female sharks with large bite marks – suggesting that the wounds were caused by mating with an aggressive male shark.

However, experts weren’t convinced that the wounds were caused by mating.

Tristan Guttridge – a behavioral ecologist and wildlife presenter for Discovery’s Shark Week – said, “Due to position as the wound [sic] looks like it’s healed a fair bit and although mating scars can be nasty they are more superficial than that. The shape of it to me likely indicates a bite from another shark – seems a bit extreme for defense.”

RELATED: Photo Of Monster Great White Shark That Died With A Huge Sea Turtle In Its Mouth Goes Viral

Michael Domeier – a Discovery presenter and director of the nonprofit Marine Conservation Science Institute – explained that he was “confident this is competitive aggression.”

“I keep hearing people…describe this sort of thing as territorial aggression, but these highly migratory sharks don’t have a traditional territory,” Domeier added. “That scar will heal to the point it won’t be a good distinguishing mark.”

Najafov noted that he was “very lucky” to have spotted and photographed the shark with the huge scar before it healed fully.