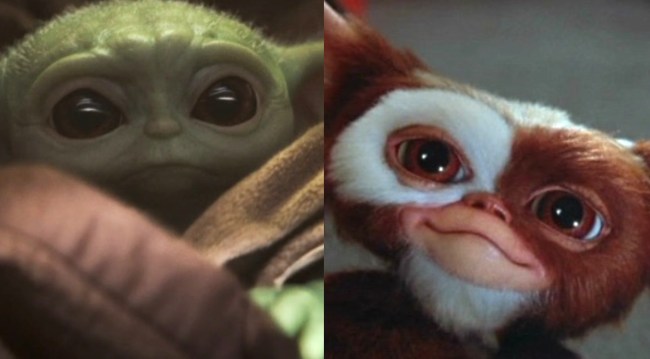 As soon as Baby Yoda was introduced in the pilot episode of The Mandalorian, the character became an immediate pop culture phenomenon as even those who didn’t watch the show became aware of who Baby Yoda was through alternative forms of media like memes.

According to director Joe Dante, though, the creation of Baby Yoda wasn’t an ingenious piece of adorable character design but rather a “shameless” ripoff of Gizmo from his Gremlins movie.

“I think the longevity of [the films] is really key to this one character [Gizmo], who is essentially like a baby,” Dante told the San Francisco Chronicle during a recent interview. “Which brings me, of course, to the subject of Baby Yoda, who is completely stolen and is just out-and-out copied. Shamelessly, I would think.”

Wisely, though, Dante says that he does not currently have plans to take the Mouse House to court over his complaints.

Gremlins, a horror comedy, first premiered in 1984 and was followed by a 1990 sequel titled Gremlins 2: The New Batch. A third film in the franchise has also reportedly been in development for some time.

As for Baby Yoda, after popping up in a couple of episodes of The Book of Boba Fett alongside his pal Din Djarin, he will next be seen in the third season of The Mandalorian, which will premiere on Disney+ in February of 2023.

RELATED: Original ‘Star Wars’ Mastermind George Lucas Had One Major Concern When It Came To Introducing The Baby Yoda Character