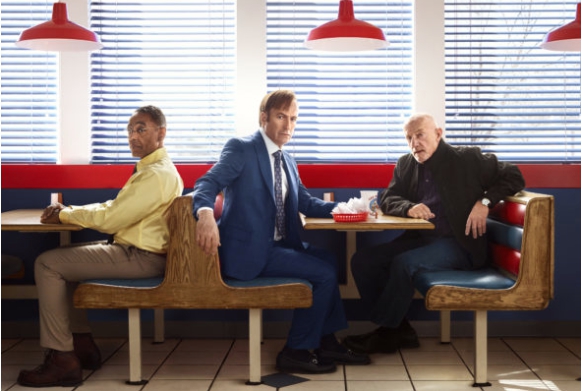 Better Call Saul is one of the few spinoffs that rivals the original, which is particularly impressive seeing as Breaking Bad sits firmly on my Mount Rushmore of Favorite Shows of All-Time. BCS’s 10-episode fourth season is nearing its close and although it doesn’t provide the high-stakes violence and consistent life-or-death decision making, there’s beauty in the slow burn. Co-creators Vince Gilligan and Peter Gould succeed in painting the picture of how well-to-do Jimmy McGill transforms into amoral lawyer who rose to prominence in Breaking Bad.

Admittedly, I was underwhelmed by the first few episodes because I was thirsty to see a bad guy get dissolved in acid or Gus Fring go full savage. Only until I detached myself from my preconceived notions of the show was when I could truly enjoy it.

Oscar-winning director Guillermo del Toro is a huge fan of Better Call Saul, so much so that he admits to preferring it over the 16-time Emmy-winning Breaking Bad. The Hellboy director took to Twitter to describe what makes the show so special, and I will now refer to del Toro’s tweet thread when my friends asks me to explain my obsession with the show.

A small reflection in the middle of BETTER CALL SAUL's new seasson: I like it even more than BB, not to be a contrarian but because the evident stakes seem smaller but the moral downfall strike me as deeper, more poignant… pic.twitter.com/DGIJg7MLL0

With Walter White (who turns Black) you were tracking a massive downfall/transformation. BCS takes you by the hand as Jimmy becomes Saul Goodman (No Good in him) in small painful tumbles.

Kim is the key!

Even in his relationship with Chuck, Jimmy was an enabler, he kind of loved seeing Chuck diminished. Both brothers wanted to see the other "down". Beautifully laid out.