This Lad Has Collected A Beer From Every Country In The World Cup – How Many Can You Identify? 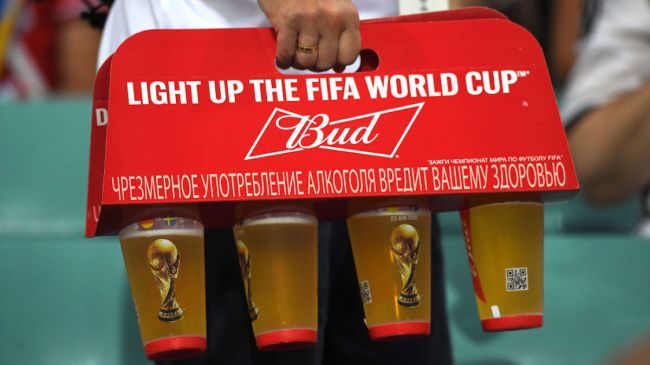 With just days to go until the 2022 World Cup kicks off, the tournament is shaping up to be the disaster many thought it would be.

From dilapidated “fan zone” accommodations to strict laws about homophobia and drinking, from reports of match-fixing to journalists being accosted, everything surrounding the upcoming World Cup has been a PR disaster and there’s still a sinking feeling it could get worse from here.

None of this is a surprise, of course, given that Qatar was never properly-suited to host a World Cup anyway, as evidenced by the fact that the tournament is being played from November through December *for the first time ever* given that it would’ve simply been too hot in Qatar to hold the legendary tournament in the summer when it’s normally played.

All of this, by the way, comes after Russia hosted the tournament back in 2018. Hell, even the insanely corrupt former president of FIFA, Sepp Blatter, has admitted giving the 2022 World Cup to Qatar was a mistake. Way to go, FIFA!

Still, despite all of the controversy and chaos surrounding the World Cup, there are still fans around the world who are desperate to enjoy the festivities (which is totally their right), such as this brew-loving bro who was able to round up a beer from all 32 nations — yes, even Qatar! — that are participating in this year’s edition of the prestigious international football tournament.

A beer from all 32 countries playing at the 2022 World Cup in Qatar. Here we go! pic.twitter.com/UC38tPx8g0

Here’s the full list of beers, as per the man himself @ballstothis, in case you’re curious. It certainly wasn’t easy, as he says he had to have an Italian friend who was on vacation in Africa get him the beer from Senegal, for example.

RELATED: Major Rumors Of A Match-Fixing Scandal Hit Qatar World Cup As FIFA Worries About Over $100B Worth Of Bets