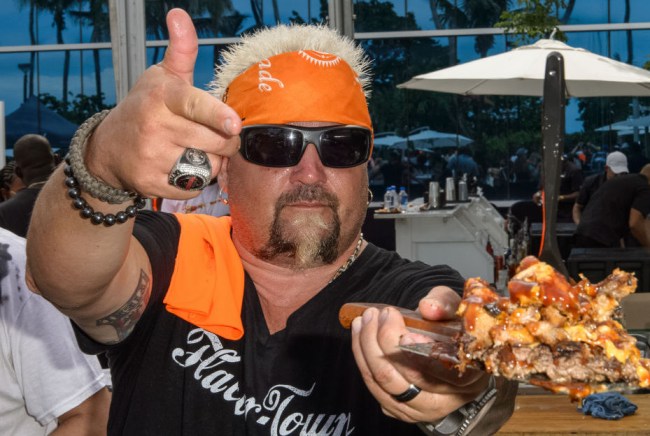 In 2005, Food Network set out on a quest to find its next star and would inadvertently stumble across their culinary savior in the form of Guy Fieri, who has been serving as the mayor of Flavortown ever since.

I’m one of Guy’s Guys (the nickname I just came up with for hardcore fans of Guy Fieri). I’ve never attended a bar crawl in his honor but I do own two of his cookbooks, a bowling shirt covered in flames, and have patronized a number of the diners and dives (but none of the drive-ins) that he’s featured on his most iconic show.

One of my biggest regrets in life is never making the pilgrimage to Guy’s infamously panned restaurant in Times Square before it shuttered its doors— a magical land where nachos were served on the lid of a trashcan and Donkey Sauce flowed like the waters of Niagra Falls.

Last year, the chef teamed up with Planet Hollywood founder Robert Earl to open a restaurant near Disney World specializing in chicken fingers and now the duo is planning to expand their restaurant empire in an attempt to give the people what they want.

According to Restaurant Business, the two men have decided to turn the restaurant into a chain and will be opening up a new outlet in Miami this spring before setting their sights on other locations:

The partners say a second unit will open this spring in the third-floor food hall of the Aventura Mall in Miami. Like its predecessor, the branch will feature grilled and fried chicken fingers and 22 sauces. The strips will be offered in sandwiches, on skewers and as bowl toppings, in addition to being served just as fingers.

Chick-Fil-A and Raising Cane’s might want to watch their backs because there’s a new Guy in town.