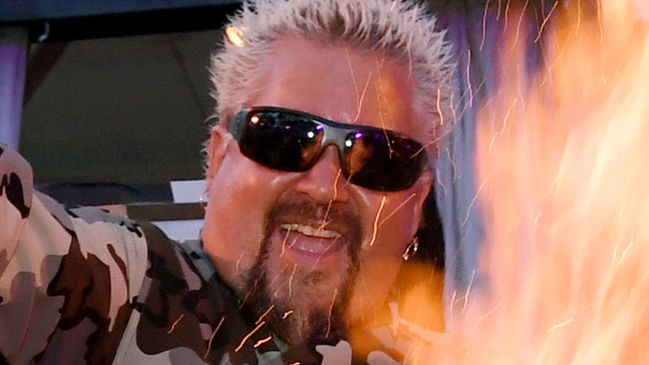 There’s a good chance a certain mental image pops into your head when you read the words “Guy Fieri,” which likely involves spiked blonde hair, a pair of Oakleys (possibly worn in a fairly unconventional manner), and a colorful gaudy shirt that would look right at home in a bowling alley.

There’s also a very good chance that the shirt in question is covered in flames, as that particular pattern has been to go-to for the loyal legions of fans who gather for the bar crawl known as “FieriCon” and people who dress up as the celebrity chef for Halloween thanks to the infinitely-memed picture of the Food Network star rocking the fiery top.

Fieri has largely embraced the fandom surrounding him (one steeped in complex layers of irony and post-irony), although he’s repeatedly stressed the one piece of apparel he’s most commonly associated with was something he only donned a single time before it took on a life of its own.

With that said, I’d argue the shirt deserves to be placed alongside some of the similarly iconic artifacts surrounding Julia Child’s kitchen in the food exhibit at the National Museum of American History. Unfortunately, it appears that will never be the case based on a recent (and fairly tragic) revelation.

The Mayor of Flavortown recently chatted with Insider during a conversation where said he changed his tune on the shirt previously said he despised, saying:

“The fact that people love it, I love it. As long as I’m putting a smile on somebody’s face, as long as it’s making positive energy, that to me is great.”

However, he also shared a pretty devastating development after admitting he has no clue what happened to it, saying, “I don’t even have it. I don’t even know where it is.”

I can’t think of a better jumping-off point for National Treasure 3.