‘The Hell Is He Doing Here?’ Wondered Gwyneth Paltrow When She Saw Samuel L. At A Marvel Event 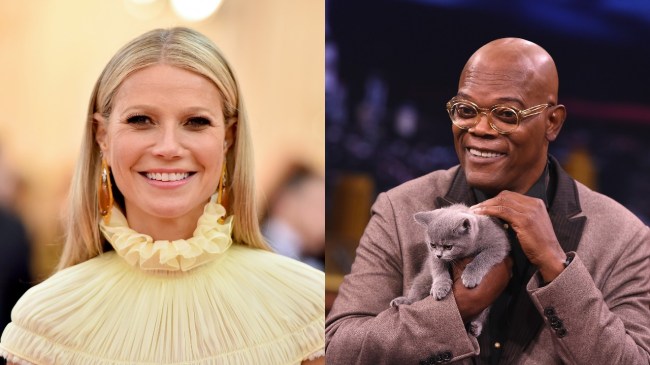 Say what you will about Gwyneth Paltrow (mother of Apple and Moses), but there’s really no denying that she’s one of the most successful actresses of the last 20 years.

Not only is Paltrow an Academy Awar winner (I know, right?!), but she’s also considered to be the “First Lady” of the most successful film franchise in history — the Marvel Cinematic Universe — and founded her hilariously-named company, Goop, which has become valued at over $250 million despite its utterly preposterous name.

Who cares that she named her firstborn child after a fruit, the woman has been on her A-game since the 1990s.

And yet, despite the fact that the majority of her filmmaking output over the last decade has been consumed by the previously aforementioned Marvel Cinematic Universe, you would think the Goop Founder and CEO would at least pay a modicum of attention to it, right? WRONG!

Not only has Paltrow likely never seen any of the MCU movies and failed to realize she actually appeared in Spider-Man: Homecoming, but she didn’t even know that THE Samuel L. Muthafuckin’ Jackson appeared in the franchise with her, via Esquire:

In a live discussion with Empire, [Marvel Studios President] Feige talked about filming the big funeral scene in Avengers: Endgame, which saw most of the film’s cast assembled together. “Gwyneth Paltrow [was] asking why Sam Jackson was there,” said Feige, Empire reported. “And the other actors [were] jumping in saying, ‘What are you talking about? He’s Nick Fury! You’ve been in movies with him.’ But it was really something special.” [via Esquire]

Look, Gweny — knowing her, it’s probably not alright that I call her Gweny, but I’m more of a “ask for forgiveness rather than permission” guy anyway — I know you’ve got a lot on your mind sweetie but, holy shit, Sam Jackson has appeared in as many MCU movies as Robert Downey Jr. and has been doing it since Iron Man came out over ten years ago.

She could at least pretend to give a flying goop about the place where her movie paychecks have been coming from from the past decade.