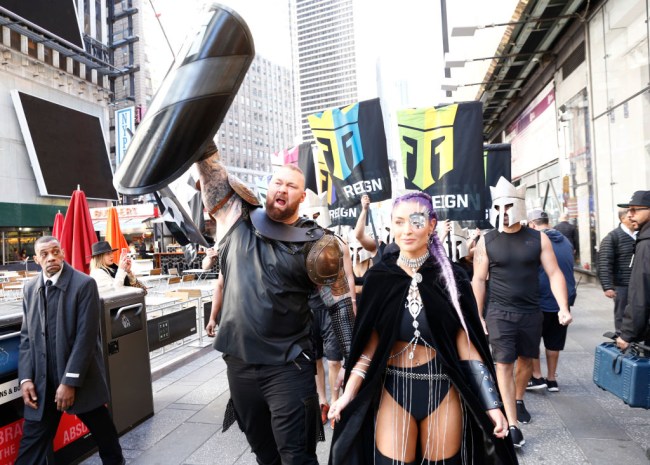 Hafþór Júlíus Björnsson has moved on since the end of his role as Gregor Clegane on Game of Thrones. Björnsson is back powerlifting and retaining his title as Europe’s Strongest Man. Now has his own gym to continue being a massive behemoth and setting world records for lifting.

Hafthor Bjornsson, who won the Arnold Strongman Classic, Europe’s Strongest Man and World’s Strongest Man in the same year, has started his own gym. The Mountain who holds the world record for a deadlift of 1,045 pounds and the Strongman record of tossing eight kegs in 16.35 seconds, debuted Thor’s Power Gym in Iceland earlier this week.

Stoltman brothers have arrived! @luke.stoltman @tomstoltman ! I’m giving away 30 tickets to Iceland’s Strongest Man Challenge which will be held this Saturday. To get your tickets you must come down to @thorspowergym at Dalvegur 16B today!! First come, first serve! 🤪 Maximum 2 tickets per person. @reignbodyfuel @sbdapparel @sodastream @roguefitness @legionath

RELATED: The Mountain’s 5-Foot-2 Inch Wife Says That He Eats So Much They Need A Truck To Go To The Supermarket

Dan Bilzerian and some of his female friends visited Thor’s Power Gym.

@thorspowergym had some special guests today 👀🔥

The gym, which is located in Kópavogur, Iceland, features plenty of dumbbells, deadlift stations, squat racks, bench presses, rowing machines and curling machines. There is of course a gift shop with plenty of The Mountain merchandise and trophies.

Going to The Mountain’s gym probably won’t let you outlift Bjornsson. You can take a video tour of Thor’s Power Gym.

RELATED: ‘The Mountain’ Hafthor Bjornsson Is Europe’s Strongest Man For The FIFTH Time