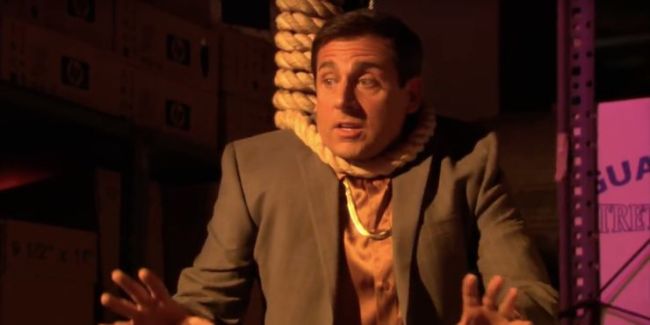 Steve Carell revealed two years ago that he would not consider doing an Office reboot because “there’s a very high awareness of offensive things today” and “it might be impossible to do that show today and have people accept it the way it was accepted ten years ago.”

If Diversity Day (season 1, episode 2) came out in 2020, Steve Carell would be the new Ellen DeGeneres, villainized and ostracized by the loud minority of online crusaders who are dead set on taking comedy literally.

As the leaves turn and the days get shorter, I thought it would be a good time to remind you all of another Cancellable episode: Koi Pond, from 8th episode of season 6, released October 2009. Also known as the ‘Haunted Warehouse’ Halloween episode.

NBC cut the cold open of the episode in which Michael Scott, dressed as SNL’s Dick in a Box, pretends to commit suicide in an attempt to scare the children straight.

There was outrage over the episode in 2009, which caused NBC to scrap from DVDs, Netflix, and syndicated reruns. But something tells me that today’s mob would have taken it a bit further and forced Carell to actually follow through with the hanging. You also should be reminded that Michael Scott referred to Darryl (Craig Robinson) as a “Gangster Pumpkin.”

This episode is killing people and those accountable must pay!

The koi pond episode on The Office kills me every time 😂😂

The Koi Pond from The Office (2009) pic.twitter.com/arZgtuVLdl