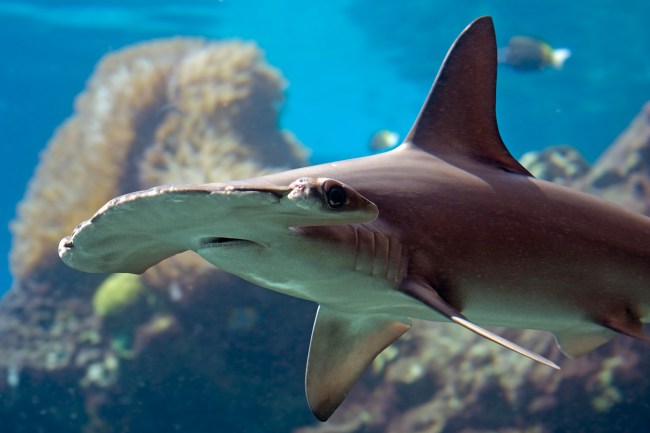 It’s still very much tarpon fishing season here on the Southwest coast of Florida. From Boca Grande Pass on up to Tampa Bay, the fishing has been on fire in recent weeks in one of the best tarpon fishing seasons in years for certain areas. Some red tide (algae bloom) in the area is threatening to slow that down but that doesn’t appear to have driven the sharks or tarpon away yet.

To a hammerhead shark, the tarpon species is the equivalent of a dry-aged bone-in ribeye cooked at the finest steakhouse around. It’s the fish hammerheads love to eat more than anything and they chase these fish up and down the coasts of Florida in search of a meal. Often times a hammerhead shark will try and snake a free meal from a fisherman fighting a tarpon once the fish is already tired out. In that instance, it’s proper etiquette to flip open the bail and let the fish swim freely without fighting the drag of the reel, but that’s not what was happening here.

This was filmed off Anna Maria Island in Southwest Florida, which is on the south side of Tampa Bay. It’s been one of the hottest tarpon fishing locations in Florida throughout the late Spring and early Summer. If you’re ever in that area and want to catch a tarpon you should 100% look up this dude, Capt. Clark Wright, because he’s been putting more people on fish in recent years than any other captain around.