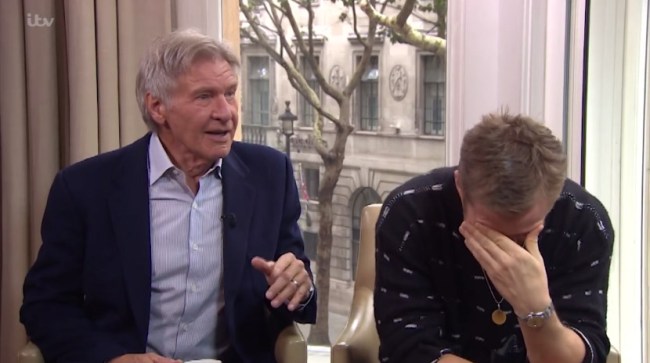 Harrison Ford and Ryan Gosling were supposed to be doing an interview with Alison Hammond of This Morning to talk about their upcoming film Bladerunner 2049.

Instead what happened ended up being one of the funniest interviews of the year with almost zero talk about Bladerunner 2049.

Before the interview even got started, Hammond had Ford and Gosling cracking up when Ryan asked her if she’s a fan of the original Blade Runner film and she admits that she’s, in fact, never seen it.

Then, after just one question, Gosling completely loses it and decides it’s time to break out the booze.

Eventually, because Hammond is paying so much attention to Ford, Gosling just gets up to see if he can help out the cameraman.

If you need a good laugh today, then this interview is most definitely the ticket.

Now, for some reason, I actually want to see Blade Runner 2049.

Alison Hammond deserves her own show after this hysterical Harrison Ford interview https://t.co/jfPhbOUuFw

Her name is Allison Hammond and going forward I strive to interview people as she does. https://t.co/ssaMNJBDk9

Seriously. I want her to do all the interviews from now on.