A Ryan Reynolds, Jake Gyllenhaal Interview Went Off The Rails, Got NSFW And It Was Awesome 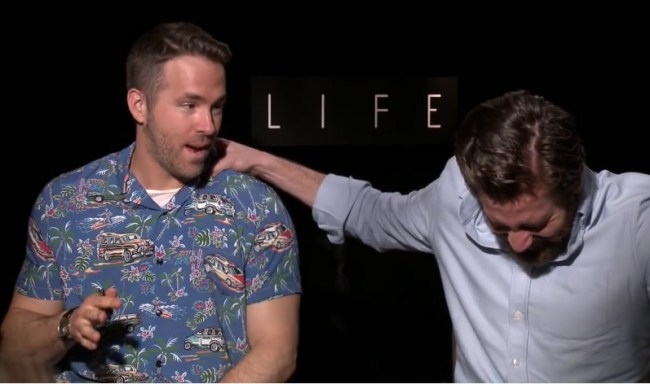 Want to know how funny this interview with Ryan Reynolds and Jake Gyllenhaal, which is supposed to be about their movie Life, gets? Gyllenhaal appears to be tearing up he’s laughing so hard at how silly and profane things get. (Mostly due to Ryan Reynolds, natch. Still waiting for you to reply to Morena Baccarin’s epic troll job, by the way, Ryan!)

Reynolds and Gyllenhaal were clearly getting more than a little bit loopy from doing interviews eventually getting to the point in this one where they’re laughing about the fact that each chair has a sticker with their name on it.

However, the interview was already well off track by that point as Reynolds scolds Gyllenhaal a few minutes into it, “Hey, fuckers, let’s get it together or let’s get out of fuck town.”

We don’t learn a whole lot about their film Life, but it’s far more entertaining than your usual sit-down with a couple of actors.

Best of all, that wasn’t the only interview Reynolds did over the past few days that crashed and burned. He and Gyllenhaal also pretty much lost it with Chris Van Vliet from WSVN-TV as well when things devolved into a discussion about Fraggle Rock.

And then last Thursday Reynolds was on Good Morning America where he discussed what it’s like to fly with kids, something many of us can relate to very easily.

“I would rather drink a piping hot bowl of liquid rabies than get on a plane with my two children,” said Reynolds.

WATCH: "I would rather drink a piping hot bowl of liquid rabies than get on a plane with my two children." @VancityReynolds on parenting 😂❤️ pic.twitter.com/G9xAUOMm3N

Of course, he is pretty much king of the dad jokes on Twitter already so that take should come as little surprise…

My daughter's only 6 months old and already drawing. I'd hang it on the fridge but honestly, it's absolute garbage.

On our 6am walk, my daughter asked where the moon goes each morning. I let her know it's in heaven, visiting daddy's freedom.

This morning, my daughter said, "quiche" which means she's smart, hungry and an asshole.

My daughter just sneezed into my yawning mouth. Seemed really fucking pleased with herself. Joke's on her. She'll have to bury me someday.

Damn it's hard letting your infant daughter go somewhere alone for the first time. I was a total mess dropping her off at Burning Man.

No matter which kids book I read to my screaming baby on an airplane, the moral of the story is always something about a vasectomy.

On our 6am walk, my daughter asked where the moon goes each morning. I let her know it's in heaven, visiting daddy's freedom.

The mobile above my daughter's crib is just a whole bunch of NuvaRings. So she remembers how lucky she is.

Being a father means responsibility. Not just for your main family, but also the secret one in Denmark nobody knows about.

Totally caved and tossed my daughter the keys to the car. She looked really happy as they bounced off her tiny infant face.